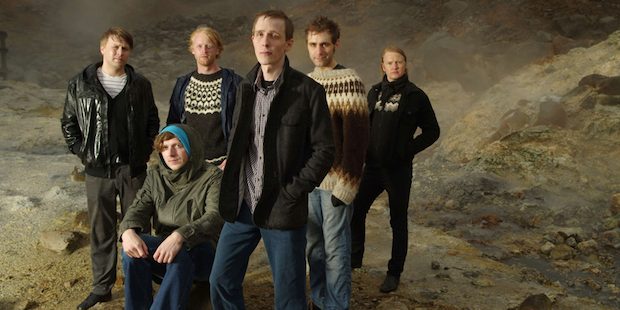 Arstidir make a welcome appearance to kick off our Icelandic season.

Some rather “musical” tunes on this week’s SnC and the start of a short Icelandic season celebrating a flavour of the remarkable music which that tiny island has to offer.

Also, we’ve some news about one of the long-established music streaming services – perhaps a precursor to some big shifts to the listening landscape.

I left the barn door open whilst recording this morning – the birds of Suffolk obviously want to be heard too!

IRONTOM emerged at the beginning of the year with an intent on forging a presence for themselves on the Los Angeles music scene. The music exhibits a variety of styles and sounds on top of a classic sensibility for song writing. With Harry Hayes: Vocals, Zach Irons: Guitar, Daniel Saslow: Keyboards, Dylan Williams: Drums and Dane Sandborg: Bass, the personalities of each of the five musicians combine to form an undeniably powerful and energetic sound.

IRONTOM recently released their debut EP, The Loose EP, on October 17th, 2012. Produced by Alain Johannes (Arctic Monkeys, Queens of the Stone Age, Them Crooked Vultures, Chris Cornell). Listen to The Loose EP to hear the range and diversity of the band. The music is effects-heavy, detailed in its parts and harmonies, and honest in its message.

It’s been only three years since Iceland’s new king of lo-fi layered lushness, Sindri Már Sigfússon, began his official recording career. “Summer Echoes”, the new and second album of his solo-project Sin Fang (he dropped the “Bous”) is now already his 4th album release (including 2 records of his other musical outlet Seabear) since 2007. The album oscillates wildly unearthing glimpses of familiarity – vintage Flying Nun here, Paw Tracks there and a Belle and Sebastian pop nous – while retaining the own stark originality of this uber-talented artist and producer.

“AOL Music is shutting down. We all just got laid off.”

Last year, Digital Music News broke news of the brutal gutting and dismantling of Yahoo Music.  Turns out that wasn’t an isolated incident: according to numerous tweets and emails surfacing ahead of last weekend.

AOL is now shutting down AOL Music and its subsidiary properties immediately.  Staffers were getting laid off on Friday, according to preliminary (and unconfirmed) details.

AOL’s official PR pontiff has yet to confirm the carnage, but here’s a tweet directly from the inside.  (Actually, it was quickly deleted, and snapped from the trash by @lorilewis).

That’s Spinner, an early internet radio pioneer transformed into an editorial, aficionado-aimed music site by AOL.   Now, it’s just one of several properties getting terminated.  At present, it remains unclear if any properties will remain, though it looks like AOL Radio, powered by Slacker, will survive.

As of yesterday Spinner appears to be operating normally.

You can listen to Suffolk’n’Cool streamed from your iPhone, Android, Windows phone, etc

Get the free app from your phone’s app store.

The son of an American jazz singer and an Italian opera and theatre director, Valente was born in Rome. Growing up around his parents’ work and his sisters’ punk and new wave records, he began to write music while attending Catholic priest boarding school in Switzerland. Despite his Latin teacher’s prediction that he’d end up as a used car salesman, Valente moved to Los Angeles to study bass playing and film scoring.

After releasing a few songs on Myspace, the word quickly spread. Valente caught the attention of a wide array of fellow musicians and producers. Among these was Marc Collin, the renowned producer behind Nouvelle Vague who offered Valente to record an album in Paris called Two For The Road along side Katrine Ottosen.

Today, Valente splits his time between Europe, Asia and America working on several projects as both producer and artist. He has worked with several artists as both an artist and producer, including Nouvelle Vague, Avi Buffalo, Gordon Gano (Violent Femmes), Angela McCluskey, and others. His latest album, Music for Rooftops was written while traveling through New York, Tokyo, and Paris, among other cities, and developed in Los Angeles. Music for Rooftops has been available for almost a week.

Whisky in the Jar – The O’Marleys (Exeter, Devon, UK)

A brand new version of Whiskey in the Jar from those Devon purveyors of fine reggae, rock, folk and traditional Irish tunes that mix into the sound of The O’Marleys. Taking influences from Romany music, The Upsetters, Bob Marley and Moving Hearts, it creates a heady and exciting soundscape.

In the rhythm section there is the wild yet subtle Bodhran playing of Mike Nangle and the heavy relentless electric bass of James King, complimented with electric percussion. On the top line is premier fiddle player Mac Moulton who plunges from Irish set dances into the jazz style of Stephan Grappelli with surprising ease. At the centre of the band is the rather mysterious 12 string guitarist, John Fitzsimons. His playing is a startling combination of cross rhythms/ jazz chords and counter melodies that produce completely original arrangements of the songs. With a background on the London music scene he brings many diverse influences to the band. Lead singer Mike Nangle hails from the theatrical tradition and adds rasping drama to the songs. Three members of the band sing (and make strange noises), creating rich vocal patterns and harmonies.

Their 2010 album, The Rising of the Moon, (their second) is on Idleday Records. It is available for download from iTunes, Amazon and Tesco online. You tube videos: http://www.youtube.com/watch?v=IHmQSFLosV0

They’ve got a few festival dates – (mostly beer festivals) coming up and a new album due out in July. Check their site for details.

Formed in the fall of 2011, Manzanita Falls is a four-piece indie-rock group from San Francisco Bay Area. They started out small, playing local shows while developing their distinctive sound. Influenced by bands like The National, Wilco, and The Frames, their sound is comfortably familiar and also uniquely Manzanita Falls.

Originally slated to be released in November of 2012, their debut album, Vinyl Ghost was delayed after the band went through a near-fatal car accident in Abilene, TX that left drummer, Matt Coit, with a fractured neck.

Vinyl Ghost is available now, and the band are currently touring the west coast in support of the album.

Over the four years since Árstíðir’s formation the band has released two full-length records and a remix EP praised by trendsetting music critics, had two number one hits on Icelandic radio, made several TV appearances in Iceland, Sweden, Russia, Germany, and the Czech Republic, and played sold out venues all over Europe. In January 2013 Árstíðir won the prestigious 21st Eiserner Eversteiner European Folk Music Award.

Consequently, Árstíðir’s music is a rare composition of the clear-cut and the complex. Their songs are easy to fall in love with, yet mixed with diverse influences such as progressive rock, indie, classical chamber music, and Icelandic folk music.

Another single from Boulder based – genre defying Paper Diamond’s forthcoming EP ‘Paragon‘ set to be released April 16th 2013. Paragon will feature a range of production, instrumentation, and collaborators all weaved into Paper Diamond’s signature style.

While “genre-defying” is an overused word, Paper Diamond is one of the few producers who truly pulls it off, seamlessly weaving together genres as diverse as electro, trap, funk, dubstep, house, moombahton and hip-hop, all with a whiff of ganja smoke floating through it.

Quite a few festival dates coming up over the summer: