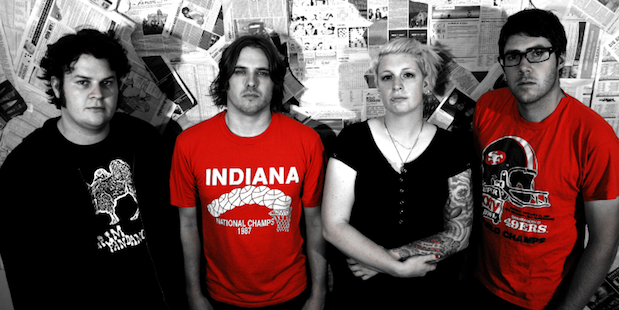 Emporers open the show in fine style this week and not a v-neck T-shirt in sight!

A diverse selection of music this week and a lot of it. Tracks from Australia to Iceland and LA to France. There’s also some surprising news on the effect of piracy on legitimate music sales.

Emperors’ debut album Stay Frosty has arrived with a bang. Widespread Australian airplay, US iTunes Single of the Week AND Rock Song Of The Year for Be Ready When I Say Go and tour supporting Everclear have been some of the highlights since Stay Frosty’s April 2012 release.

Stay Frosty is noisy pop at it’s best, played by a band unashamedly stuck in their own bubble of musical influences and unlikely to become the darlings of Pitchfork anytime soon. No song titles are spelled incorrectly or without vowels, and there are no traces of synthesizers or keys. There is no content which should inspire reviewers to use genre names such as “chill wave” and “glitch hop”, nor any music written whilst wearing a v-neck t-shirt.

Emperors first made their mark on the Australian music landscape in 2010 when they were ‘Unearthed’ by national alternative radio station Triple J shortly after forming. This led to a slot at the Big Day Out, a Rolling Stone feature and the release of the EP Sam. Along the way there’s been Australian tours and support slots with Manic Street Preachers, The Big Pink, Silversun Pickups, Ladyhawke and many more.

They’re a hard working band touring this month with Grinspoon and Kingswood:

Born in London to a Sri Lankan father and Icelandic mother, LAY LOW’s musical abilities stretch as far as her geographical heritage. Starting out as a pianist and bass guitar player; she has jammed on keyboards and synthesizers with Benny Crespo’s Gang, found her voice in blues folk and a little honky tonk bop collaborating with producers such as Liam Watson. Although her new material is taking on a new trip hop twist, LAY LOW’s distinct musical journey can still be felt at its roots, producing a honed yet experimental sound that is all her own.

LAY LOW came about in 2006, after Lovísa was contacted by a local label that picked up on a raw demo that she had uploaded onto MySpace. Not one to waste an opportunity, LAY LOW’s debut album ‘Please Don’t Hate Me’ was released that same year. An intoxicating take on classic Americana sounds, the record topped the Icelandic charts and became the bestselling original album in the country, winning no less than 3 Icelandic Music Awards.

This is one of the biggest debates in music right now, and it goes far beyond morality and artist rights.  Because what if pirates are simply buying more stuff?

That’s actually the conclusion of a new study just published by the European Commission’s influential Joint Research Centre, one that involved more than 16,000 participants across five EU countries.  And at a top level, the survey, conducted by the Centre’s Institute for Prospective Studies, found very little cannibalization between illegal and legal.  “Perhaps surprisingly, our results present no evidence of digital music sales displacement,” the report concludes.

“Our results suggest that internet users do not view illegal downloading as a substitute to legal digital music.”

“This means that although there is trespassing of private property rights (copyrights), there is unlikely to be much harm done on digital music revenues.”

Sky is the Limit – SaReGaMa

SaReGaMa is the pseudonym of Serge, an independent sound artist, muasti-instrumentalist, composer and producer.

Sa, Re, Ga and Ma are the first 4 notes of a seven notes octave in Indian music, equivalent to  Do, Re, Mi, Fa in Western music.

“I had a big passion for music but not enough means to afford musical instruments, so I learned how to build them. Most of the instruments I have are homemade. The instruments I play today are : keyboard, guitar, different kinds of ethnic flutes, didgeridoo, percussions, kalimba and jews harp.

His first album was published on Jamendo in 2007 and since then he’s been listed there among the top artists and his albums have hit number one several times. His work is featured in various large scale projects around the world and he’s a member of the excellent Triplexity whose music has been featured on SnC quite a few times.

There’s a very succinct description of the track on Jamendo:

Take a look a the video below of SaReGaMa playing Kalimba solo for Lotus –  and note how many views it has had. Remarkable.

They can’t tell me nothing – Paper Diamond (Boulder, CO, USA)

“They Can’t Tell Me Nothing” is the first single from Boulder based – genre defying Paper Diamond’s forthcoming EP ‘Paragon‘ set to be released April 16th 2013. Paragon will feature a range of production, instrumentation, and collaborators all weaved into Paper Diamond’s signature style.

While “genre-defying” is an overused word, Paper Diamond is one of the few producers who truly pulls it off, seamlessly weaving together genres as diverse as electro, trap, funk, dubstep, house, moombahton and hip-hop, all with a whiff of ganja smoke floating through it.

Paper Diamond continues his nationwide tour with Excision. The remaining tour dates are:

New York City based artist/producer, Erica Glyn, is an amplifying force in the music industry. From her self-made creations to her songwriting/production work, she’s becoming a well-known entity and making fans across the globe. She produces a unique and intriguing sound, mixing elements of trip-hop, rocktronica and a splash of psychedelic rock with her captivating vocals and commanding lyrics. Erica leans towards the unconventional, experimenting with instrumentation and tonal effects, which garner her comparisons to boundary-pushing powerhouses like Florence Welch and Fiona Apple.

Erica’s vampy, garage-pop lures listeners into “a world of the unusual and strange”, a landscape of pulsating beats, surging synthesizers, elegantly volcanic melodies, and dark, poetic lyrics. Her passion and drive for her own development exploded in her 2012 full-length release, STATIC.

Like all her work, the album was written, recorded and produced solely by Erica, with contributions from a collection of well-respected artists and special mixes by multiple Grammy award-winning master music-maker and friend, Chris Lord-Alge.

The Hammer – We Are The West (Los Angeles, CA, USA)

We Are The West uses sound and space to create an experience that is welcoming and honest.  The Los Angeles-based duo has recorded in storm drains, performed on sheep farms, and now hosts a concert series in the underground parking garage of an office building the Saturday night before each full moon. This February they release the second in a four part album of recordings, handcrafted with love and care in a barn in Western New York during the summer months.  ‘The Hammer’ is the opening track.

You are Mia Dyson and you’ve worked your ass off the past decade to be heard on the Australian continent. That work has paid off. People know your name. Writers gush about your whisky-tinged voice and liken you to Lucinda Williams, Bob Dylan and the Boss. You’ve headlined shows, played the festivals, cut three records and received plenty of radio play. You’ve been nominated four times for an ARIA, winning one. You’ve toured with Eric Clapton, Bonnie Raitt, and Stevie Nicks.

But there is this dream you’ve had since you were a child listening to your parents’ vinyl collection and reading E Annie Proulx. Get to America. Tour across the States playing music, soak into the American culture and ultimately, make a lasting record.

So you sharpen your teeth and sink into that dream.

Well, Mia Dyson, welcome to America. It’s 2009 and nobody knows your name.

In the next three years you’ll separate from your long-time partner, you’ll go broke, lose your band and your management will try to change your name and sell you out to reality television.

And what is your response to it all?

You make the most gutsy and revealing album of your life. You reclaim the helm of your career, building a community of players and friends, touring the vast cities and big sky country you’ve heard achingly described in your favorite songs, revelling in America the way you dreamed of it.

“The Moment” is the kind of album America meant for Mia Dyson to make all along and Australia has responded with a standing ovation. Released in the fall of 2012 in Australia, “The Moment” has captured the hearts of new fans and connected her more deeply with her existing supporters. Dyson toured the country, playing to capacity crowds and nabbed her fifth ARIA nomination  – this time for Best Blues/Roots album.

Now it’s back to America.

With the wind at her back from a trip home, Mia returns to the US this spring to release “The Moment” in the states on April 23, 2013. An album release tour will put her in front of audiences on both coasts, and the work of holding up her artistic mirror to a mythic land of musical  opportunity will begin again.

So there you have it.

More dub with Pete Cogle at The Dub Zone

The Hollows are a group of multi-instrumentalists; a freewheeling hootenany of a band. A veritable junkyard of mandolins, banjos, guitars, accordions, horns, harmonicas, and various other musical doodads are in constant rotation. With no frontman (or six frontmen), everyone writes and arranges material, creating a diverse and uniquely blended sound. The live show is a high-octane, unpredictable barn-burner. Check out the music video for August off their self-titled EP – it’s playing in the shownotes.

The formation of The Hollows was a very gradual process. Erik Saxvik (Illinois), David Paarlberg (New Jersey), Jeffrey Kurtze (Indiana), and Daniel Kwiatkowski (Michigan) all studied theatre together in college during the mid-2000s.  The four friends would spend many a night playing music in living rooms, bonding over their love of Bob Dylan, Neil Young, Tom Waits and all things strange and spooky; but it wasn’t until the foursome relocated to New York City and met Rob Morrison (North Carolina) and Justin Aaronson (the only native New Yorker) that The Hollows sextet was finally complete.

After receiving high praise such as The Deli Magazine’s Artist of The Month, TimeOut NY’s Critic’s Pick, and rave reviews from The Huffington Post, CBS Radio, My Old Kentucky Blog, Relix, The Wild Honey Pie and more, The Hollows show no sign of slowing down in 2013 with the release of the album Neverending Show on April 23.