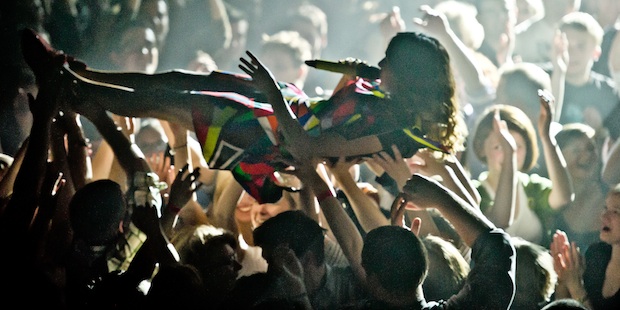 From 16 year old Pop Idol winner in Poland to a mature artist of 25, Brodka is playing South By South West next week, as are all the artists on this week’s show.

It must be spring – assorted pasty pale musicians are emerging from the long winter hibernation blinking into the sunlight and migrating south by south west for the first of the season’s music festivals which happens next week in Austin, Texas.

This week we’ve a selection of tracks by artists who will be playing in the city next week, a couple of whom I’ve seen in New York and here in the UK. They, of course come with unreserved recommendations to catch them live. I hope the show gives you a bit of a feel of what these festivals are like, a rapidly revolving carousel of different musical styles based around short sets and great energy.

The only difference is that in our version of SXSW, you can avoid all the rushing between venues and, of course, the queues. Welcome to Austin.

We’ve got a strong representation from Canada in the show, they’s enthusiastically shrugging off their parkas and looking forward to some Texas sunshine.

The band’s follow-up, City City, netted Chic Gamine nods for a JUNO Award nod and a Western Canadian Music Award in 2011. The quintet recently hit the road for a U.S. tour with Louisiana-based singer/songwriter Marc Broussard, providing opening sets and backing vocals, including a nationally-televised stop on Lopez Tonight.

Folly was written and recorded over the course of several heat waves and snow storms by May and her cohorts in a rotating cast of bedrooms, basements, and attics across the District, bearing witness to two foreclosures, a bit of squatting, a larger bit of eviction, and a subsequent life shuffle that would rival that of a wind-addled gypsy moth.  This patchwork, guerilla style recording, which grew out of necessity, ultimately served to instil a sense of tension throughout the record leaving one hanging on despite the imminence of something so delicate falling apart.

Pree’s album, Folly, is available via the wonderfully eccentric Paper Garden Records who have a showcase event with The Wild Honey Pie called Beehive at Uncorked 900 E 7th St, Austin on Friday 15th from midday until 10:30pm. Details at: papergardenrecords.com

Ben Caplan is the ideal festival artist, putting on high energy live shows, both on the official programmes and, likely a s not, impromptu street performances.

If you have the good fortune to be at SXSW, you’ll find Ben playing:

Manitoba in Texas – but it only only just fits

Approximately 1500 miles directly north of Austin, on the shared 97th meridian, another city of under a million people houses a music scene that outperforms its modest size. Musicians from Winnipeg, Manitoba will be shedding their parkas this weekend, packing their vans, and heading due south for the world famous South by Southwest music festival.

The SXSW Manitoba Music Showcase happens on Thursday of next week from 3pm til 6pm at Canada House (Friends) at 208 E 6th St.

It was Marti Sarbit’s voice that immediately captured multi-instrumentalist and songwriter Rusty Matyas’s attention at the Cavern, a Winnipeg bar where Sarbit was fronting a Motown cover band and Matyas had come to mix the sound. Matyas, a major label veteran via his band The Waking Eyes and a touring member of Canadian indie rock stalwarts The Weakerthans, knew he wanted to write something for — or with — this innately gifted young singer if only to commit her voice to tape and hear what the results might be. The instantly compelling “Say You” was the song they soon whipped up, and one quick listen to what is now Imaginary Cities’ dramatic album opener clearly demonstrates what caught Matyas’s ear – and what subsequently propelled the duo to the top of Canada’s college charts and year-end best-of lists.

Though Canadian critics often emphasis the soul-music aspect of the duo, Imaginary Cities utilizes a mixture of musical flavors for a more expansive, often stirring, pop-rock palate, as in the albums’ title track “Temporary Resident”, or others such as “Don’t Cry,” or “Hummingbird”. They also take an amusing left turn with “Manitoba Bossa Nova,” which sounds just like the title suggests.

Royal Canoe is a group of musicians on a mission to construct ambitious, inventive music; creating samples by running conventional sounds through unconventional pieces of gear, drumming on bathtubs and garbage cans, listening to Big Boi and manipulating bits of old records.

The band calls Winnipeg, Manitoba, Canada home – the enigmatic prairie city, which has served artists as both an abundant, creative watering hole and a debilitating quagmire. Royal Canoe’s songs are an effort to make sense of resentment and romanticism of the city’s divergent identities. The band’s debut effort, Co-op Mode, helped win over audiences across Canada as the band toured throughout the country.

Winnipeg indie pop outfit Boats makes impossibly hooky pop songs about death, being old, girls, glowing bears and escaping the spectral plane of existence and reappearing at a football game — all of which can be found on the band’s sparkling third album, A Fairway Full Of Miners  via Kill Rock Stars.

The new record also sees the band stretch out over more ambitious epics (Animated GIFs) and heartfelt ballads (Advice on Bears). It’s eclectic, but not unfocused; the whole thing is unified by frontman/band leader Mat Klachefsky’s helium-high yelp of a singing voice.

Maturity has become almost a cliché when it comes to describing albums — especially third albums — but A Fairway Full Of Miners has a focus to it that comes with relentless touring (Boats has done eight North American tours) and a sophistication that comes with refining a particular sound over the span of three albums). But don’t confuse mature with boring; Boats albums give you that thrilling feeling of being on the verge of spinning wildly, dizzingly out of control.

Trapdoor Social is Merritt Graves and Skylar Funk, and they’re here to save the world. Merritt and Skylar met at the Environmental Analysis program at Pomona College in Southern California. By day they studied the challenges for planet Earth, and by night they found refuge in their music. “Unfortunately, Climate Change has become a large source to draw from musically,” says Merritt. “We try to take our anxiety over it and transfer it into a sonic medium.”

“But we do it in different ways,” adds Skylar. “Merritt channels his frustration when he writes, while I draw a lot more from empathy. I think it would be pretty boring if we weren’t so different of people.” What results is a driving, emotive alt-pop experience.

The duo made its official debut with the six song “Death Of A Friend” EP, released in December 2012. It was produced by Curt Schneider, and features Death Cab For Cutie’s Jason McGerr on drums.

Monika Brodka, the sprite‐like vocalist BRODKA, launched onto the Polish music scene with a bang as the winner of Polish Pop Idol in 2004 at the young age of 16. Now, eight years and three award‐winning albums later, BRODKA has strayed away from her pop‐music start and is developing in a more mature, alternative electro‐pop artist. BRODKA continues to surprise audiences as proves her latest work, an English‐language EP entitled LAX and recorded at the Red Bull Studios in Los Angeles.