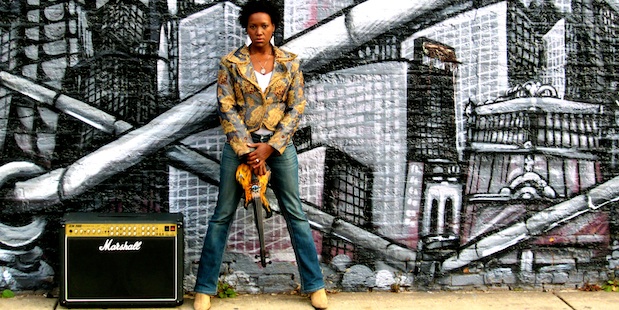 Adia is one of two fine female fiddlers on the show this week.

We’ve a wealth of female fiddlers this week with tracks from Adia & The 7 Eyes and then a delicious take on a classic but totally surprising tune with which Amanda Shaw and The Cute Guys will be closing the show.

Otherwise, the energy levels in the music are generally up this week. A quirky old selection of course but hell, that’s half the fun.

There’s been a development in the past week which is rather depressing.

IODA Promonet, from whom I have acquired some fine music over the years was bought out by a set-up called The Orchard a bit back but now they have announced that IODA is closing down. That is sad, but even worse, all the IODA download links in the Suffolk’n’Cool shownotes – and there are lots of them, will stop working from March 1 – that’s Friday, of this week. Actually, and this is bizzare, I was just grabbing the IODA artwork here and I notice that iot is in beta – that must be one of the longest beta phases ever!

I’m sorry about the short notice but if there any tracks that you’d like, get yourself over to the shownotes and have a bit of download frenzy.

Ralph and Chris found themselves hating life after school, so they started writing songs like the ones they enjoyed throughout college. After putting a solid lineup of friends together, they quickly started releasing music and referring to themselves in the third person. It took the band a while to come up with a name as meaningful as Boxed Wine, but they believe it says everything it needs to. The group’s influences are quite varied, but one should listen and make relevant comparisons to all other bands in existence (especially ones that love fuzzy bass and disco beats).

Their songs don’t all sound the same, so if one isn’t your piece of cake then please try out another. They probably won’t be offended, and are relatively confident that cake metaphors are still cool…

Award-winning author Kent Gustavson was born immersed in a rich musical heritage. As the son of peaceniks, he grew up with family sing-alongs. From Pete Seeger, Joan Baez, and Bob Dylan, he darted to classical, jazz, and avant-garde jazz, before circling back to the Greenwich Village folk canon and tracing that music back. In singer-guitarist Doc Watson, Gustavson found a treasure of American music. His biography of Watson, Blind But Now I See (Sumach-Red Books) is the definitive biography of an American icon.

Born and raised in Milwaukee, WI; Adia enrolled in her first violin lessons when she was just three and a half years old. Her talent was unquestionable throughout her musical studies, which culminated in a Master of Music degree in violin performance from DePaul University in Chicago.

When she wasn’t busy practicing the violin, Adia was singing soul, funk and R&B; drawing inspiration from artists like Lauryn Hill, Stevie Wonder and Erykah Badu. But it wasn’t until 2003 that Adia got a glimpse of the artist she was to become, when she met legendary Croatian blues rock guitarist Nikola Sarapa who quickly exposed Adia to one of the greatest players of all time: Jimi Hendrix. “It completely redefined everything that I wanted to be as a violinist and a musician,” she remembers. “ I wanted to sound like that.”

Adia eventually molded her influences into her own unique playing style. She started backing up numerous Chicago bands, mesmerizing fellow musicians and unsuspecting audiences with her improv chops, bluesy jams, and powerful voice.

In late 2011, Adia teamed up with some of Chicago’s finest: Matt Nelson on keyboards, Geoff Lowe on bass, Chris Siebold andPat Fleming on guitars, and Jonathan Marks on drums; to form the live band Adia & The 7 Eyes. They released their first recording Live from The Alley in May 2012. The performance features three of Adia’s original songs, as well as a powerful rendition of Jimi Hendrix’s “Stone Free”. There’s a remarkable video of that track in the shownotes. Whether you’re a Hendrix fan or not, do take a look.

Three bands took a well deserved rest after the “Dub en sauce“ festival. But the sunshine, the atmosphere, the wine and the good cooking turn the hollidays into a musical jam ! Résult : several tracks emerge from this collaboration, we selected three for you, to share these tasty moments improvised by Bo Marley, Disrupt and Volfoniq “.

” After the great Dub En Sauce festival in Montpellier summer 2007, I spent with Volfoniq, Bo Marley , Rootah and some friends a whole week in a super-nice house in the village of Capestang / Southern France. Located at the Canal de Midi… Eating, drinking, chilling – and jamming! A lot. This EP is the result of those funny sessions. ”  Disrupt (Jahtari) – december 2007

” I’ve got a very affective link with this release, as they were made in a special mood : during holidays, after a great festival (Dub en sauce), in the country side, with top level musicians, totally improvised. It has the essence of these moments, I think you can almost feel the sunshine of it if you listen and close your eyes 😉 “.  Volfoniq – december 2007

Bringing the less is more approach to the combination of blues, folk, and “other” styles (leaning toward the “other”), Detroit Rebellion has been quickly capturing attention as a band to be reckoned with.

Despite the name, Detroit Rebellion is actually a Providence, RI based duo composed of Jeff Toste (guitar/vocals) and Michael Lamantia Jr. (drums), aka Mikey Lams. Toste has roots in the New England scene for over 15 years, most notably with his indie band, Laurels. Mikey Lams is a friend of both the RI (Makeupbreakup) and NYC (Rockethouse/Aerial love feed).

In 2009, Toste began performing solo as Detroit Rebeillion, which he referred to as “a tribute to old school blues, folk and Americana.” Since Mikey Lams joined on drums, Toste found Detroit Rebellion “mutating into something else.” The result of that “something else” is the sophomore release EP Fork in the Road.

A second (and rather different) track from the Venezeulan rockers.

The phrase “garage rock freaks” defines HolySexyBastards.  With mouthfuls of punk, hard rock, stoner rock, blues and bad attitudes to spare, they began and indeed continue as a power trio from Valencia, the industrial capital of Venezuela.   They were also recently awarded the most prestigious title for a band in Venezuela as the recent winners of the New Bands’ Festival for 2012.

Subsequently they have been selected to play showcases at SXSW 2013 as well as Canadian Music Week, both taking place in March.  They will be bringing their set-list-free post-hardcore anarchy to cities across North America and in Europe beyond that.

Their self-titled debut is released at online stores including iTunes and Amazon from March 5.

miX&dorp has been producing classic blues remixes at Black & Tan for a while and it’s quite a while since we heard a new one. These really are very special – of course, they won’t suit the purists but for me they inject new life into the blues.

They are available on iTunes at http://itunes.apple.com/nl/artist/mix-dorp/id416567823

Should I Stay Or Should I Go – Amanda Shaw and The Cute Guys (New Orleans, LA,USA)

Amanda Shaw commands attention with her poignant & rhythmic sounds that only a Louisiana prodigy could deliver. At 22, she is a powerful international touring artist, has recorded 3 critically-acclaimed albums, won the Big Easy Award for Best Female Entertainer, roles in films including IMAX “Hurricane On The Bayou.” The New Orleans native is a pioneer of the new breed of young, roots-based music.

Now the band are releasing one of their fan favorites at live shows but never-before-recorded cover of “Should I Stay or Should I Go” by seminal punk band The Clash.

The track is mixed by Grammy award-winning and platinum-selling engineer/producer/musician, Ken Lewis (Kanye West, Jay Z, Alicia Keys, Mariah Carey). The single will be released as a free fan appreciation single download along with video during Mardi Gras this month.

“Mardi Gras is the perfect time to release our new single and debut the music video for “Should I Stay Or Should I Go” in celebration of families coming together to have a good time! We are giving it away to our fans for free as a big thank you and because music brings people together to have a good time and those are two things that New Orleans does best!,” says Amanda.