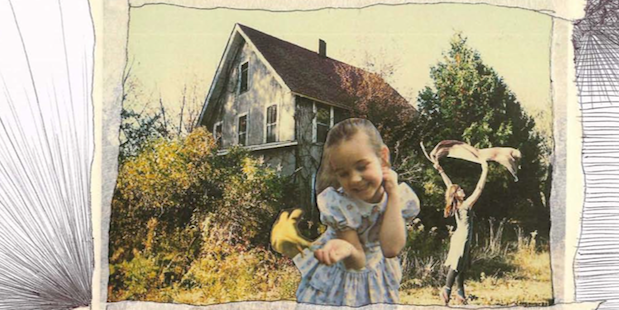 Swimming in Speakers are welcomed back on the show this week (Album artwork: Meadow Elizabeth)

A generally reflective feel to the music this week – probably picking up on my mood as we prepare to admit defeat in surviving looking after my dear and elderly mother-in-law and maintaining 24 hour care. Time to hand over to the professionals. Sad.

It does, however, even in this relatively short show, give the opportunity to dive deep into some beautifully layered music from the likes of Little Tybee, Wasaru, Great Divide and a couple of tracks from the mesmerising Swimming in Speakers who have a new album just out. It had a mention on the Alive and Amplified blog earlier this week but I think this is the first airing a track has had on the intertubes.

All We Have – Swimming in Speakers (Adirondack Park, NY)

On their stunning debut LP, swimming in speakers bends the very idea of genre classification. The two artists from upstate New York swirl together thoughtful indie ambient pop, toe-tapping freak folktronica, and honey-dipped female vocals to create what will likely become the soundtrack for the next few months of your life.

The duo ignited the rich Northeastern music scene with strong live performances and an impressive EP that twice landed them on episodes of Grey’s Anatomy.

On “guessing the others” the sonic mixes of Christopher Clarke wind organically through the album with both layered nuance and great fanfare, while Meadow Elizabeth’s gorgeous vocals cascade over them in a dazzling union.

The confidence with which they string together their stories lead the listener to more corners than one would ever expect to visit on a single album.

Title track from the third studio album which is released on April 9, 2013 via Paper Garden Records. The video for the track which you’ll find on their site documents the past several months on the road. The touring isn’t letting up, they are setting out on a 21 date tour at the beginning goof next month that will start in Athens GA and progress up as far as Pianos in NYC (via SASW in Austin, TX) in before heading back down to Atlanta.

You can catch the video, pre-order the album and win tickets to see the band at the lovely papergardenrecords.com/

It’s that enticing mix of sounds and a language that I don’t know well enough to be distracted by the words, which, in this case, form another dimension against which the instruments play.

When the time came to make that second album, the band stuck to their indie roots and funded it entirely via Kickstarter. The group also expanded their sound, bringing in a bevy of talented Chicago musicians behind the scenes.

Recorded in four days at Third Ward Studios in Milwaukee, with follow-up sessions in Chicago and Rockford, IL, Great Divide is an ambitious affair, moving effortlessly from soul to pop to funk, all tied together by songwriter/vocalist Teddy Grossman’s lyrical openness and his way with a hook.

Great Divide will be touring heavily through all of 2013, with horn section in tow.