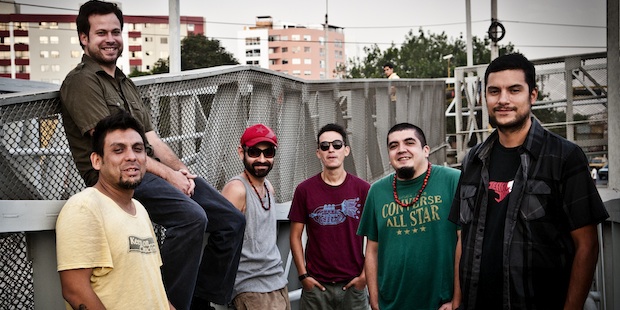 Bareto join us this week from Lima, Peru.

So, it’s seven years this week since Suffolk’n’Cool was launched to a deafening roar of indifference back in 2006 with a mission to give support and encouragement to independent musicians all around the world and to deliver your blast of fresh musical air via the barn, here on the east coast of England.

Coincidentally, SnC started within a day or two of another show called PC Podcast (you may have heard of it) which some bloke called Pete Cogle let loose at the same time. To cut a long story short, podcasts come and podcasts, well,  podfade, but we’re both still here and I think our shows have improved over the years. Certainly, we’ve become good friends and enjoy a fine level of mutual abuse.

About an hour ago I got an email from Bethan “Would I like to play a track on the show?”

Something special. But what? The band’s Twitter page describes them as “Oom-pah english folk-pop band with rockets and a giraffe or two.” That’ll do.

The band is based on the folklore of the old, penniless cobbler of Keston. His business was struggling and he would cheer  himself up by throwing barn dances  for the villagers. The rip-roaring dancing would wear out the soles ofthe villagers’ shoes, and so the cobbler was never short of work again!

This is a band that’s about music making, collaboration and lots of fun. Their 13-track debut album “One, For Words” is testimony to that. You can get it via their site.

They’re playing at The Brewery Tap in Ipswich, here in Suffolk on Saturday 9th Feb headlining the “Stout, Oyster and Black Pudding Festival” along with Straw Bear, Hot Feet, Jasmine Ava, Underline the Sky and Phil Jackson. Entry is free. Check the details at www.thebrewerytap.org

BOY is comprised of Swiss-born Valeska Steiner and German-born Sonja Glass (neither of which are boys). The two met serendipitously when they participated in a prestigious music workshop in Hamburg. They immediately bonded over their classical-music training and a mutual love of the French band Phoenix. Before long, they decided to form a band and began writing what would become Mutual Friends. Mutual Friends is an autobiographical affair, comprised of smart, sharply-observed songs that resonate because they’re about everyday life.

Their first full-length album Mutual Friends is out now in the UK and is scheduled for release in the USA at the end of February where they’ll be touring in March starting at Joe’s Pub in New York on the 1st then to Seattle, San Francisco, LA, San Diego, Minneapolis, Chicago, Montreal (yes, I know, Canada), Philadelphia and Vienna, VA details on their site where there’s also a rather fun video which looks to me as though it was shot in Barcelona and Barcelonetta. If you know better, let me know.

This track is from a sampler collection which you can download free at www.noisetrade.com/boy

Ten songs written by the group, in their first time working with a music producer (Miami based Manuel Garrido-Lecca), mixing cumbia, reggae, psychedelia and dub, among other latin generes. The lyrics talk about how Peruvians have to deal with their differences as society (in Perú, every city is like a little country) to keep the machine going.

The first single off the album is called “Camaleon” (“Cameleon”), a song about how politicians change every time because of their personal convenience, no matter what’s better for their community. In the music video, a clown try a “politician costume” and go for the election poll.

Other subjects in the record are racism, social differences and street insecurity, facts that coexists in Peru’s everyday reality, but that are not easy to talk about, because, as the title of the album suggest, “you see just what you want to see”.

“I love rock ’n’ roll, the passion and rebelliousness of it,” says Lauren. “But I want to be part of it in my own way—I want to take poetry and rock it out.”

Which is exactly what Lauren does—and then some—on Inconsequential Dream, her astonishing debut album.

Much like Lauren’s riveting live performances, Inconsequential Dream is a cathartic, emotionally cleansing experience that keeps the listener on the edge of their seat throughout—only to find them back in line when the last track stops, eager to sign up for another wild ride.

Over 1,400 artists took to the stages and clubs of New York City this past October, and it’s now time to join the excitement for 2013: CMJ 2013 artist submissions are now open! Submit your application via Sonicbids today for special early-bird rates.

Halifax’s Ben Caplan will play two eagerly anticipated hometown shows at the Company House on February 1st and 2nd. The gig on February 2nd with special guest Paper Beat Scissors is now totally sold out.  A second show on February 1st with guest Taryn Kawaja has just been announced.  Tickets can be found at http://bencaplan.ca

After a much needed break from a year of non-stop touring, Ben Caplan returns to his life on the road with a slew of Canadian shows hitting stages in the Maritimes, Quebec and Ontario before heading to showcase at Folk Alliance International conference and festival in Toronto in February 2013.

Following his Canadian tour dates and a return visit to Texas’ South by Southwest Music Festival, Ben will find himself sharing stages with the likes of Wilco, Santana, Ben Harper, Jason Mraz, Rufus Wainwright and more at the Byron Bay Folk Festival in Australia come April 2013. After the three-day festival he will perform in Melbourne and Sydney.

Last year was a break through year for the bearded folk wunderkind. Non-stop international touring, countless nominations which led to him taking home the much coveted Entertainer of the Year Award at the Nova Scotia Music Awards, and collaborating on a holiday single with Norwegian pop stars Katzenjammer are just a few of the many highlights. 2013 will see Ben working on his follow up release while maintaining a healthy tour and festival schedule.

Last year, when rummaging through her great grandfather’s film reels, the fiery and theatrical singer / songwriter / entertainer Anna Haas came across footage of her grandmother in NYC that dated all the way back to 1929. Anna’s grandmother had recently passed, and she was inspired by this serendipitous historical find – footage of Coney Island, Bushwick, dancers at the Copacabana, vintage cars, and even of her grandmother’s pet monkey.

“Find Your Home” is a track off of Anna’s debut LP Crazy Is, and there is a beautiful video that incorporates some of that archive footage as a tribute to Anna’s grandmother and her adopted home of NYC.

Haas’s album Crazy Is is a timeless yet modern tapestry of stories and musings blending sarcasm, metaphor, and absolute vulnerability. Haas writes from an honest and sometimes controversial place as her lyrics shift in subject matter from a loving homage to a secret relationship, to emotional dependence on love and drugs, and the imagined loneliness of Marilyn Monroe. The collection of eleven songs was recorded in multiple studios throughout her hometown of Nashville and New York, and took nearly two years to complete.

One of the quirks of iTunes is that although Suffolk ’n’ Cool is available in all iTunes stores (e.g. UK, USA, France, etc.) reviews are only posted to the reviewer’s own specific store. Yes, it seems daft but it emphasises how much I’d appreciate your review on your iTunes store.

It’s very easy to give the show a 5-star rating (if that’s what you think it deserves). Just go to the Suffolk ’n’ Cool page on iTunes, click on the “Rating and Reviews” button and click on the stars to “rate” the show. While you’re there, if you have just a minute or two, you can click on “Write a Review” and do just that. Even a few words would be very much appreciated.

When you’re done, let me know which store you posted your review to.

A few weeks ago AMPed members were asked to submit the tracks that really stood out for them in 2012.

I listened to dozens of tracks that I’d played on SnC in the course of the year and kept coming back to this one by Kim Edwards. The simple honesty and intelligent expression along with a beautiful tune enabled it to say so much – and I suppose it must have resonated in some way – so I selected it as my stand-out track of the year.

The next day, long before the track was played on AMP, KIM got in touch with a preview of her new video which features the song. Here it is.