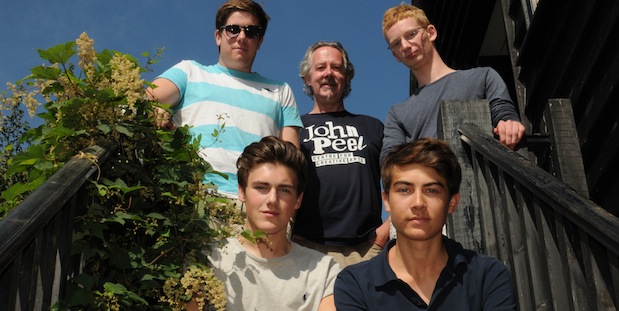 The Argonauts – a Session at the Barn. This could become a collectors’ item 😉

The Argonauts called by on a very hot day a couple of weeks ago to play us a few tunes and have a chat.

They may describe themselves as “Four pretty boys from the safe haven of Dedham step out into the real world with their raw and fresh take on the ironically mainstream indie genre.” But I for one consider there to be real potential in each of these young musicians. George Adams, Joe Wenden, Jake Murray and Dan Thomson who in this formulation make up The Argonauts.

Even in the short time since the recording, the band have gone onto indefinite hiatus, not, I hasten to add, because of the Session at the Barn, but because leading light George Adams has taken off to Australia for a gap year.

Even with the likely demise of the band as such, I rather think we’ll be hearing more from them.

There’s more of their music lurking on the likes of YouTube, MySpace, Soundcloud – go check it out, and if you like what you hear, let them know.