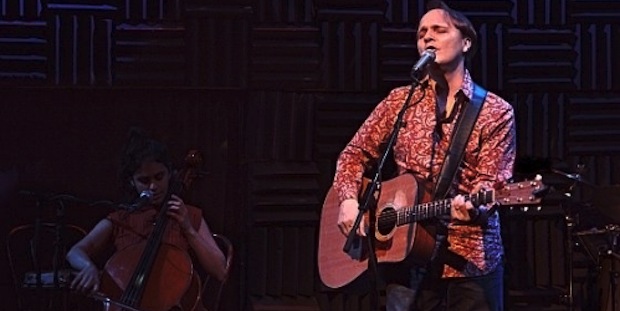 Marc Farre – to play The Living Room, NYC on Sept 28, the night before recording his new album. Wise?

Our blast of fresh musical air from the east coast of England this week takes us from the almost mainstream indie scene out into the less trod paths of jazz and some amazing harmony singing. We’ve tracks from Brooklyn’s Team Genius, From Hannah & Maggie, Teddy Presberg, Antonia Vai, Marc Farre, The Gaddabouts and Green Tea quality in evrey track – different qualities but by heck it’s all Suffolk ’n’ Cool.

Team Genius continue to impress with their ability to create a wide variety of indie-pop heard across their New York City opus, channeling the highs and lows, the fears and excitement and mostly the knowledge and feeling of the wide eyed young adult experience in the Big City.

The subtle progression of lyrics and moods from each EP to the full LP capture a very familiar experience, like growing up or evolving. Start your journey with these 3 EP’s and soak in the very real and very human experiences of a band living in NYC.

If you are one of the lucky ones living in the NYC area you should totally come check out the 3 EP Release Show at Union Hall September 29 w/ Celestial Shore and Friend Roulette! Hope to see you there!

Maggie Kraus and Hannah Hickok of the New York folk duo, Hannah & Maggie, had only been playing together a year when they released their debut, Fine Being Here (2011). The summer after the album release they embarked on a successful inaugural tour. Prior to their union, Hannah had built an impressive youtube.com profile with her gorgeous voice and imaginative take on popular covers, and Maggie had honed her guitar skills in rock bands. Each had unique stylistic routes to the intimate singer-songwriter aesthetic they embraced as a combo.

Both grew up with families deeply enamoured by core folk artists like James Taylor, Simon & Garfunkel, and Joni Mitchell. “I can remember being five years old in the car and my dad singing note for note with James Taylor. He was doing a harmony and I remember being impressed with that,” Hannah says reflecting back. “I remember being 11, my dad putting on Simon & Garfunkel’s ‘An American Tune,’ and thinking, ‘Oh my God there is such sadness in this music,’” Maggie says introspectively. “We came from different backgrounds, but found the folk music we grew up with as a common thread.”

They are playing Sidewalk Cafe in NYC tonight so it’s probably a bit late to get to that one but on October 6 they are at Ken Rockwood’s magical Music Hall on Allen Street in the LES at 3pm.

Just mentioning Rockwood Music Hall, take a look a the schedule atwww.rockwoodmusichall.com and be astounded – just so much music.

The music of Teddy Presberg is rooted in improvisation, inspired by the moment and the audience.

Teddy is known for speaking his own language on the guitar. He’s not flashy with in-your-face chops. He can own one note, and with that note, you know exactly what he means.

After spending several years as a sideman on the folk music scene and numerous US tours, Teddy embarked upon his own solo musical career by producing music described as “instrumental shoegaze jazz.” His debut album, Blueprint of Soul consists of songs written in a stream of consciousness, tracks done in one take, and unforgettable improvisational grooves. The result is a funky Friday-night party record, honoured as a Critic’s Pick Top 10 Album of 2007 by All About Jazz.

Since his debut recordings, Teddy has led several formations of his own band across the US. He has released several more albums to critical acclaim and has found international recognition with the remixes of his album Outcries From a Sea of Red being released on Timewarp Music.

Currently, Teddy is performing in support of his latest album, Apocalypse Yesterday, on which you’ll find this track.

Antonia Vai is a 24-year old singer, songwriter and multi-instrumentalist from Sweden, well-established on the music scene of Stockhom. She has been titled as a “bohemian soul diva”, but has clearly been influenced by folk. Focused on storytelling, shaped by rhythms and unique melodies, every song turns into a journey. She shifts between sadness and hopefulness. Combines metaphors and contradictions. One second she’s dynamically explosive, and the other she’s emotionally stripped down.

Antonia began recording her songs in the bedroom, or in random hotelrooms along the road, and ever since, the songs started spreading and circulating on the net. A growing request for a debut album emerged. In September 2012 she is finally releasing her album “Lovers and Prophets“, a tribute to forbidden love and sanctifications. In the same turn, she’s releasing “Dirt From When The Earth Was Flat“, an album with gathered homemade productions.

That is from Marc Farre’s 2007 album Secret Symphony. Through which I was first introduced to Marc’s music.

After two years of writing, arranging, and saving the shekels, Marc Farre will finally be going into the studio to record his 6th release, Near-Life Experience, with his beautiful band.

And the night before they record, they’ll be performing one NYC show, to play these fantastic new songs. Marc says, “Trust me, they’re the best batch yet!”

It all happens next Friday, September 28, 7 pm at one of my favours venues, the wonderful Living Room, 154 Ludlow Street, in the heart of NYC’s Lower East Side.

“Please come, enjoy some great music, and send us blasting with love and good vibes into the recording studio the next morning!”

Playing for Change Day this Saturday

This Saturday, (Sept 22) musicians and music lovers all over the world will be celebrating in person and online (via streaming Stageit performances) to support global music education for children, and we hope that you are planning on joining in the fun.

Playing For Change Day, 2012 is going to be an amazing day of music and community:

If you have not yet decided how you are going to participate this Saturday, check out the interactive map at pfcday.org to see all the shows taking place in your area. All donations go to providing music education for children through the Playing For Change Foundation — you may donate online, via SMS (more info in the PFC Day FAQ)

The Gaddabouts have been declared an, ‘…all-star collaborative…’ by Time Out New York, while Relix says of their 2011 self-titled debut, ‘…Brickell’s playful, finely honed lyrics, smooth honey-toned vocals and the band’s mostly laid-back grooves make every track shine.’ Moreover, last April, the quartet made their live debut at Carnegie’s Zankel Hall as part of the WFUV concert series.

The 19-song, double disc album was recorded in New York City in April and July of 2011.

Green Tea’s keys are held down by Aaron Scharmer with styles enveloping jazz, rock, classical, and futurama – he’s the melotron phenomenon and improvisational whiz. The bass guitar fills bodies with John Julka behind it, otherwise known as miniFlea, John is SOLID energy. John Coletta, on flutes/whistles, vocals, and hands has been compared to Ian Anderson of Jethro Tull with his flying flute-rock stylings and art rock vocals. Besides being a world-renowned semiatician John is most likely “THE WORLD’S BEST” hands player (it has to be seen to be believed).

At the core of Green Tea’s sound is Trevor Roark, vocals/guitars, with his original song arrangements that compliment the post post-modern thoughts of our civilized culture. This fresh sound, with intelligent lyrics, indemnifies him as the heart of the Green Tea’s sonic distinction. Yet, Zach Hubert drives home the band’s power on the drums. With unique percussive patterns, Zach gives each song an edge that fans love.