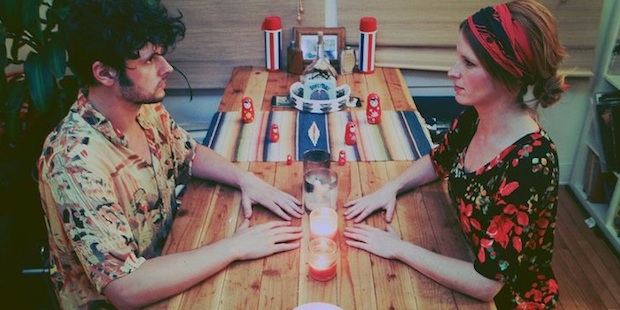 The Peach Kings: yes, “gypsydelic” is a good word.

An inadvertent fishy theme this week with the show topped and tailed by tracks called Fishermen. The voice of Paige McClain Wood infuses the sound of the Peach Kings with a delicious smoky sound in our opening track from Texas / California and we close out with Icelandic band Útidúr’s song Fisherman’s Friend which itself has some highly distinctive vocals. In between, Nordic Giants and Shy Around Strangers make welcome returns whilst Michna, Leftover Cuties and Angelo M impress with their style and skills.

The Peach Kings, Texan Paige McClain Wood and Californian Steven Trezevant Dies, are set to release their new EPHandsome Moves in September 6, 2012. The EP will be released exclusively on vinyl, and as a digital download via iTunes. The duo will be playing a string of tour dates this September, including a free residency at Harvard & Stone in Los Angeles along with a stop by NYC in September.

They describe their sound as “gypsydelic,” which is just what it sounds like. Stemming from their inability to choose one genre of music to play, they coined the term in order to reflect their own personal view of the band. “Gypsy-” because they were inspired by playing outdoors and “-delic” because it contains just a hint of strange. The Peach Kings are strongly influenced by visuals in cinema and fashion.

The Peach Kings draw their sound and inspiration from the smoky smooth crackle of blues, folk, and soul vinyls as well as the hypodermic tones synthesized in various beat laboratories across the globe. Stripped down, The Peach Kings’ power is derived from Paige’s hauntingly sensual vocals combined with Steven’s complementary rhythm and picking.

While the intoxicating “Fisherman” is the first single from Handsome Moves.

Suffolkandcool.com and a fond farewell.

Work is progressing at a frenetic pace on the development of the new website. It’s a complete fresh start from the ground up which would simply not have been possible (let alone in the time) without the assistance and advice of my good chum Justin Wayne (The Justin Wayne Show) who is proving himself to be a veritable goldmine of under the hood know-how. I hope you’ll like it.

Justin and his lovely wife Dr Jamie are moving from London back to Manitoba, USA next week so I trust you’ll join with me in wishing them bon voyage. I know we’ll be in regular contact and I hope we’ll be able to collaborate on more good stuff.

Who knows, perhaps we can both get to CMJ next year.

Brighton duo Nordic Giants were playing what they describe as cinematic post-rock at The Studio Bar at Komedia as part of the Great Escape Festival in May. A bunch of us just stumbled in pretty much by chance and were delighted with what we saw and heard. An unbelievably complex yet compact stage set-up involved more lengths of electrical string that I’ve had hot dinners as well as the projection of quite stunning silent videos with which the band played.

This really was something else.

Hidden behind feathered masks and effortlessly changing between instruments, the duo performs live original soundtracks to a backdrop of award winning short films (Provided by Shorts International). From dreamy ambient swells, epic builds and huge moments of power to a combination of dark, funny and beautiful short films, which can bring tears, smiles and actually scare you at times. Imagine the visual story telling of a cinema experience mixed with the raw energy and passion of a live gig – and you’ve hit the nail on the head!

Emerging on the music scene after a steel mill bankruptcy cost him his pension, Angelo M has since made the unlikely transition from steelworker to touring artist.

With guitar influences ranging from the likes of Ry Cooder, Chet Atkins, Duane Allman and Leo Kottke, recent reviews have been hailing Angelo M as a brilliant guitarist with an excellent voice, and calling his performances powerful.

To date, his songs have been featured in the PBS Television series RoadTrip Nation, and garnered song writing honours in the prestigious ‘Mountain Stage’ NewSong and Billboard’s Song contests.  His track Every Kind Of Blues was also selected from thousands as a finalist in Billboard’s 17th World Song Contest and received a Gold/First Place in Blues in the 27th Mid Atlantic Song Contest.

Angelo M’s debut album aptly titled From Steel To Strings is now available to purchase via all major download stores.  Details on how you can purchase it along with information on forthcoming gig dates can be found at

We heard from Shy Around Strangers in show 330 with their track It’s Alright. Now they’re back with Never Look Down – some interesting lyrics in here.

Assuming that all has gone well their debut EP was released yesterday, August 28th. Next is a series of shows around NYC.

Co-founded in 2010, members Emily Powers, Saric and Michael Dawson shared a disdain for the current superficial trends in the recording industry, and starting recording their first EP as a collaborative protest against the importance placed on physical aesthetics.

The sultry grit in Emily Powers vocal delivery is enough alone to entrance an audience. Her voice breaks with the sincerity of a wolf in sheep’s clothing, luring you in with a sinister wink, and leaving you excitedly ill at ease somewhere between fear and sexual tension as you ponder her clever wordplay.

The Moving Mountains EP  is the first new material from New York producer Michna in nearly three years, since the release of his highly-acclaimed debut album Magic Monday in 2008. It’s been quite a while between releases, but Michna’s been anything but idle during this period – he’s done everything from painting to production for the NBA to remixes for DM Stith, Joy Orbison and Kelis. And all the while, he’s been working on new material, taking his time to record a follow-up to Magic Monday that represents another great leap forward in terms of both songwriting and production.

His latest EP, Moving Mountains demonstrates the result of this endeavor, and the four tracks here provide a neat summation of Michna’s versatility, covering more musical ground in 20 minutes than most artists do in an entire album.

“Wanted Exotic” has house-influenced sounds giving the clearest nods to Michna’s “other” career as a club DJ in NYC.

Leftover Cuties is currently in the studio working on their forthcoming album with producer Jake Sinclair (Weezer, Pink, Butch Walker) which is due out early 2013. The band recently released an all-covers EP called Departures boasting special arrangements of favorites like “Poker Face” by Lady Gaga and “Don’t Think Twice, It’s All Right” by Bob Dylan. Departures followed their critically acclaimed debut Game Called Life EP which features the breakout title track and theme song to the Showtime hit series The Big C (listen here), as well as their album Places To Go, which was helmed by producer Tony Berg (Peter Gabriel, Pete Yorn).

A stonking 65 artists have been added to the line-up for the now sold-out Iceland Airwaves – including GusGus, Hjálmar, Sin Fang, For A Minor Reflection and Nico Muhly to name but a few.

The festival, which takes place between 31 October – 4 November in a wide array of Reykjavik venues, also welcomes Pascal Pinon, Lay Low, Daníel Bjarnason, Captain Fufanu,  Úlfur, Borko, Kira Kira, Ghostigital and many others to the line-up – see below to see the full list of fantastic artists who have recently been added:

And click here to see the FULL line-up so far – it’s going to be incredible!

Útidúr (pronounced: ooh – detour) is a ten piece group from Iceland that plays joyous and ambitious chamber-pop with a dramatic streak. Although this charismatic crew is quite (midnight) sunny in attitude they also know their way through darker waters. Trace elements of Angelo Badalamenti, Beirut, Calexico and Ennio Morricone can be found in their system so fans of these should expose themselves to Útidúr in any way they deem appropriate.

Formed by guitarist/singer Gunnar Örn and keyboardist Kristinn Roach, Útidúr started churning out multifaceted songwriting that soon chain-reacted the project to mushroom into a ten strong bunch. The full posse now includes players of double bass, drums, trumpet, violins, a second guitar and an accordion. The band has honed their craft for a while and began playing at various venues in downtown Reykjavík in late summer of 2009.

Útidúr’s debut album ‘This Mess We’ve Made’ is out now and was recorded at the Sigur Rós recording studio ‘Sundlaugin’ in the summer of 2010. The album is big in sound, featuring over 20 musicians, and you can expect a spacious blend of bipolar drama and sofa-sinking mellowness, all soaked in hook-laden pop sensibility.