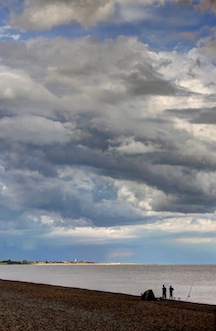 A hand-picked selection of the freshest new music for you again this week with tracks from Brick+Mortar, The Glitch Mob, The Dust Engineers, Maren Parusel, Beast Make Bomb, House of Blondes and Crystalyne.

BTW for those of a sensitive disposition there is a word in Snot Nosed Dweeb (no not any of those words) that some people may find disturbing – that’s why this edition is flagged explicit. Fair warning?

I was in the rain in Dunwich this afternoon, just down the coast from Southwold, in the sun. I note that Latitude Festival is located on “the sunrise coast” – I guess that means East.

Brick + Mortar are an indie rock drum & bass duo who fuse driving percussion, grooving bass, eclectic samples, and anthemic vocals to create a new world sound that is so fresh you truly need to hear it yourself. Consisting of Brandon Asraf and John Tacon, the duo have become a significant part of the musical and artistic culture of Asbury Park, NJ as they are one of the first electronic drum and bass pop duos to have such success in the area. Since middle school, the two bonded over their shared interest in the artistry of songwriting and as the band Brick + Mortar, they began to focus more heavily on the use of electronic samples in their music as well as relying less on improvisation and more on structured pop songs.

The duo began performing regularly up and down the New Jersey coast, building a reputation as one of the strongest live acts to come out of the state. Performing live with triggered samples creates a show like no other where all samples are physically altered and timed on the spot.

The Glitch Mob is a three-piece electronic group from Los Angeles, composed of Ed Ma (edIT), Justin Boreta (Boreta) and Josh Mayer (Ooah). What started out as a partnership between friends, each sharing a similar and unique vision for the future of electronic music, has evolved into a kaleidoscopic sound that can only be described by referencing The Glitch Mob name.

Selling out venues from coast to coast, the band quickly became a favorite at venues such as Coachella, Red Rocks, and Lollapalooza with their visceral, innovative performances that paired the best of dance music with the backbeat of hip-hop.

Their first album, called Drink The Sea was released in 2010 with a follow up EP (We Can Make The World Stop) in 2011. At the end of last year they began work in Joshua Tree, California on a second album which is expected to be released later this year.

It seems the bloodbath of inevitable lay-offs started at EMI on Monday night and yesterday. The recordings division was acquired last November by one of the other big music corporations, Universal and the publishing side of the business by Sony. From reports flying around the web, Sony are doing the obvious thing and getting rid of former EMI employees in the publishing division.

So, if EMI was worth anything it was for it’s inventory of recordings and publishing rights holdings. I see no more reason for Universal to effectively duplicate it’s music recording and distribution facilities. There’s just not enough of what they would call “units” being shifted these days.

I feel sorry for the music enthusiast people working there but I don’t, for one minute, expect that this will be the end of the lay-off story.

Originally conceived to create the fictional home recordings of a nonexistent South Dakotan teenager, The Dust Engineers are in reality a new Brooklyn/Queens-based band. “Ask Bobby Zimmerman about inventing a persona,” laughs Zachary Meyer, singer and guitarist. “Sometimes romanticization is better than the real thing.” After performing at a Bowery Poetry Club multimedia exhibition, Meyer decided to make The Dust Engineers more than a fantasy, and enlisted Ryan Egan (bass), Sara Maeder (vocals, tambourine), Erik Rosenberg (guitar, vocals), and Jared Harel (drums) to form the band in 2011. Employing coed harmonies and twangy bottleneck slides with reckless abandon, their new EP Bail proves tough to classify. “One foot on a skateboard and the other in stirrups,” replies Meyer when asked about The Dust Engineers’ singular sound.

Listen to the debut single “Snot Nosed Dweeb,” from the upcoming EP Bail, due out July 17, and you will find yourself immediately drawn into their 90’s meets 2012 sound with a twist of pop sensibility and irreverent lyrics that will ring true for anyone who’s ever dreamt of quitting their job. It’s available as a free download from their Bandcamp page.

The Dust Engineers recorded this, and all tracks, live in the studio rather than multi-tracking piece by piece, creating a warm and stage-ready sound for your stereo. Recorded by Andrew Lappin and mixed by Yale Yng-Wong (Here We Go Magic, Country Mice, Fort Lean, Tiny Victories), The Dust Engineers have created an impressive EP of 5 unforgettable tracks. The album is released under the label and creative collective, No Horse Town, which is made up of musicians, poets, visual artists, and writers around the country.

MAREN PARUSEL is a name you need to know, NOW! Out of the ashes of a terrible incident in which all of Maren’s instruments were stolen in New York City last year, shines a bright light out of the Midtown Tunnel and into an intense musical journey that you will not soon forget. What came of her sound is a revamped style of guitar-driven tones, synths, and the ability to take on the world. Not to shabby if you ask us.

Parusel is gearing up to release her sophomore full-length, Tightrope Walker(Requiemme Records/ BMG Chrysalis), on June 19th to eager ears. Today the band debuts the first single and title track from the album called, “Tightrope Walker,” the perfect song to kick off your Summer.

Filled with dreamy synths, beautiful and transcendent guitars, and Maren’s blend of poppy and gorgeous vocals, this song will provide you with everything you have ever wanted in a song. With a voice reminiscent of Blonde Redhead’s Kazu Makino, with a dose of pop flare thrown in, Parusel brings every piece to life to provide what can be described a polished and danceable collection of dreamy tracks.  With bandmates in tow, including Eric Brozgold (drums), Josh Cass (guitarist), and Chris Hoffee (bass), the group has already been getting attention.

So, the Latitude Festival starts tomorrow at Henham Park, near Southwold. The weekend ticket will cost you £183 including access to the camping areas. Artists playing include Bon Iver, elbow and Paul Weller, headlining Friday, Saturday and Sunday nights respectively. Of course, there are a ridiculous load of other artists performing not only music but comedy, poetry and theatre. Good luck if you think you can catch everything!

Personally, big festivals in muddy fields have never been my thing, I think I get  bit claustrophobic with that many people around and, rather worse, there’s no getting away from it. That’s why I prefer Great Escape and CMJ, just as much music, none of the big name big crowd stuff and from any venue you can step outside into the “real” world in under a minute.

I did notice one other event that perhaps I should get to, just out of curiosity. The small village of Peasenhall is about halfway between the barn and Latitude. I was out that way this afternoon and noticed something that you may not have heard about. They are holding their very own Pea Festivalincluding dozens of pea themed events. You can celebrate the village’s pea heritage by competing in the World Pea Podding Championships or try your luck at obtaining the National Pea Throwing title. That’s probably more than enough temptation so get over to their site and see if it tickles your slightly surreal fancy too.

From their EP Sourpuss.

Formed as NYU students in 2009, Beast Make Bomb have toured the country in support of several acts, including Cold War Kids, Tokyo Police Club, and The Whigs. The band was also featured at Rolling Stone Magazine’s 2011 SXSW showcase, sharing the stage with Queens of the Stone Age, they played SXSW again this year.

As the group puts it, “We are young spirited grungey transplants living in Brooklyn and we want the rawness and high energy of our live performances to spread far and wide so that when people read about us they feel like they must go to the live show to get the full picture of what Beast Make Bomb is.”

House Of Blondes is an electronic trio from Brooklyn.

For those of advanced years, there will be echos of early OMD, New Order and possibly Brian Eno (then known as Eno). Echos is often not enough but this band delivers with a confidence and not least in this live recording from May this year.

Hear more studio recordings on their new album Clean Cuts, which is out now.

After just wrapping up a 3 month tour of visiting over 60 high schools in Canada earlier this year, the band has been cutting their teeth on the road and are finally ready to share some new material with fans.

Take a look at the video for this track.