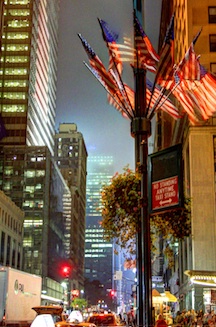 This week, since the show falls on July 4th, we celebrate independence with tracks from three former British colonies or dependent territories, USA, Canada and Australia. Well, actually there are four with a final track from Morecambe (it’s in Lancashire but pretty much looks at the Cumbrian Fells across the bay).

So, a celebration of all things and people of independent spirit.

Unusually, the photo was not taken today, although I wish it could have been. It comes from a set of pictures that I took in Manhattan on an eerily misty night 18 months ago.

The ten members of Brisbane’s Inland Sea are bound together by a love of complex harmonies and song writing. Since forming in early 2010, they have won hearts with their intricate five-part vocal harmonies, interwoven instrumentation and lyrical sincerity. A colourful and dynamic live show accompanies their unique approach to song writing.

Nine members of the band played an amazing set at The Great Escape which Pete Cogle, The Grumbler, Justin Wayne and I had the pleasure of seeing and hearing.

Now this is taking independence too far. There is no information about Flat People on Jamendo.

However the good folks at Fort Worth Star-Telegram have written:

There are also a couple of videos on their MySpace at www.myspace.com/flatpeoplemusic

Rah Rah, the Regina, SK alt-pop ensemble released their sophomore albumBreaking Hearts, in June 2010. It was the follow up to their equally incredible debut album, 2008′s Going Steady (both on Young Soul Records).

Over a bit of collective band downtime, Erin Passmore (see show 312) and Marshall Burns from Rah Rah released solo/side-projects, and the band decamped to record their next album with illustrious indie-rock producers Gus Van Go and Werner F. That upcoming album, The Poet’s Dead will be released in the fall of 2012, and an EP of non-album tracks, called Little Poemscame out a couple of weeks ago to prepare listeners for the awesomeness to come.

If you like electronic music in all its forms, it’s likely you’ve experienced the Swiss American Federation at one time or another. The two producers, songwriters and DJ’s, Christian B and Marc Dold have a top-secret sound laboratory in Los Angeles, where they relentlessly create their signature sounds in dance and electronic music that has been championed by many artists and labels.

Dold and Christian B originally met in Hollywood, CA while shopping for gear at a local music store and quickly discovered they’re fondness for good music and cocktails in the early afternoon and totally opposite musical backgrounds (Marc Dold – classical – indie music and film scoring geek and Christian with his obsession for DJing to gobs of party going aficionados and love of electronic and depressing 80s music), with that they instantly became the eclectic producer DJ team known as Swiss American Federation (S.A.F.).

As for their original music, S.A.F. has been busy secretly putting out a small collection of UK charting dance singles over the years that have been championed by EDM artists and DJs including John Digweed, Kenneth Graham, Tristan Garner and many others.

They are currently putting finishing touches on their first full-length album,Ghost•POP•Machine, including co-writes with Cary Brothers, Meiko, David Sterry, (from 80s band – Real Life), Aurah and others.

Shy Around Strangers is a great band name in its own right, but what makes this three-piece’s namesake even more apropos is their mission to make the music itself the public face and persona of the band. Co-founded in 2010, members Emily Powers, Saric and Michael Dawson shared a disdain for the current superficial trends in the recording industry, and starting recording their first EP as a collaborative protest against the importance placed on physical aesthetics.

The sultry grit in Emily Powers vocal delivery is enough alone to entrance an audience. Her voice breaks with the sincerity of a wolf in sheep’s clothing, luring you in with a sinister wink, and leaving you excitedly ill at ease somewhere between fear and sexual tension as you ponder her clever wordplay.

The band is currently finishing work on their debut EP, due out August 28th, while also preparing for upcoming shows in the NYC area.

John Peel Centre for the Creative Arts: “Mind The Doors”

Doors are closing for the major phase of refurbishment to turn this once redundant corn exchange into a vibrant centre for all the creative arts. Can’t wait to see the outcome in six months time.

Skipping Girl Vinegar, are one of Australia’s most talked about bands. Childhood friends and celebrated songwriters, they have released two critically acclaimed albums in their homeland, Sift the Noise and Keep Calm, Carry the Monkey that made many ‘Album of the year’ lists.

Mixed in Nashville by legendary indie US producer Brad Jones (Josh Rouse, Missy Higgins) and at Londonʼs famous Rak Studios by renowned mix engineer Adrian Bushby (Ben Kweller, Gomez, Foo Fighters), the E.P was recorded in bedrooms and beach shacks along the Victorian coastline in their homeland, Australia. Skipping Girl Vinegar are deeply invested in a holistic approach to making work, as demonstrated by their award winning, art-based album, art and animation film clip series, soon to be released into the US later this year.

The roots of the band are deep and intrinsically entwined. Hailing from Melbourne, Australia, Skipping Girl Vinegar are childhood friends Mark Lang, Chris Helm, Sare Lang, Amanthi Lynch & Kelly Lane. Skipping Girl VinegarʼsChase The Sun E.P hints at the depth of what is to come from this Australian five-piece.

Independence Day – Jesta (Morecambe, Lancashire, UK)
Jesta aka Bryan Page has been involved in the music for quite a while. He writes, produces and performs some really clever, beautifully produced material.

He’s actually habased in Morcambe, Lancashire, here in the UK.
This witty ditty (full of references to podcasting) is available as a free download from his site. It stands repeated listening and I bet you’ll be humming it too!
http://jestamusic.com/