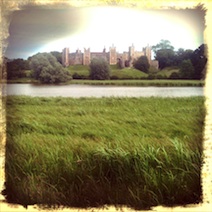 Podcrawl on Saturday was a welcome distraction and had a pretty good turnout. The conversation was of an exceptionally high and useful level. I was particularly pleasing to see two almost faded podcasters, Sarah Morrison (IR New York) and Gabor Kovacs (Electrical Language) getting, and showing signs of getting respectively, back into the saddle.

Yesterday included an opportunity to take a few minutes “proper selfishness” to walk around the Mere at Framlingham on a lovely warm summer day.

The castle was built even before Pete Cogle was born so that makes it really, really old. I suppose that explains why it is crumbling away a bit. I wonder what Pete’s excuse is.

Title track of his latest album released on Janmendo a couple of months ago. I can’t actually find a lot about FBS.However, if you take a look a the MySpace link you’ll find videos and more music.

My thanks to those who have been kind enough to support Suffolk’n’Cool through a donation (there’s a Donate button on the home page). Last week saw the first donation from China, for which thanks very much.

Makar began with Mark looking for a band to join as a singer and finding nothing appealing, so Andrea said “why don’t you write your own songs?” So he did! But Andrea kept butting in and adding her 2 cents, so Mark said, “why don’t you write a song?” So she did. And that’s where it all began!

Makar began work on its second album, Funeral Genius, August 2008 at the Seaside Lounge in Park Slope, Brooklyn. It ia also the album on which you’ll find our track.

It is now available on Amazon.com, CD Baby, Itunes and everywhere digital music is sold in the universe and has already garnered amazing reviews from the likes of Rust Magazine’s Eric Peterson who said “get ready to make some space on your shelf or playlist for “Funeral Genius” and pick it up right away. It’s going to be one of your most-loved albums of all time. Essential.”

From the beginning of Bristol Archive Records involvement in documenting Bristol’s neglected reggae heritage we’ve wanted to release an album that showcases the great talent of one of the local reggae scene’s mainstays, Joshua Moses.

Unfortunately, Joshua has no copies of the many recording sessions he has done in the years since his first session in 1978, and so it has taken more than eighteen months of painstaking research and the pursuit of numerous leads to gather together the fifteen tracks on “Joshua To Jashwha — 30 Years In The Wilderness”. The result is more than worth any effort involved on our part and is as strong a debut album as anyone could wish for, guaranteed to create a buzz among reggae fans worldwide.

The tracks on this album were recorded over a period of twenty years and include a trio of live recordings, but all the tracks have one thing in common, they are all roots tunes of the highest order.

It’s likely that if Joshua had been recording in Kingston rather than Bristol he would have become an international star, his music avidly collected and lauded with praise. It may be rather belated, but this release should go a long way towards establishing Joshua’s reputation.

Tickets go on sale tomorrow (Thursday) at what will be their lowest prices. Around £80 gets you the full delegate ticket which is, I think, something of a bargain for TGE 2013 which happens next May. If you’re less interested in the conference sessions just go for the music – it’ll cost you as bit less.

The Legend of John the Terror (Notorious) – The Imagineers (Scotland)

The unsigned (actually self managed and independent) group recently performed on CBS’s The Late Late Show for five consecutive nights (May 14-18th), as a tribute to Craig Ferguson’s Scottish roots and a tribute to his glory days of being in a rock band during his youth. The group now has their sights set on The U.S., as they plan to tour state-side later this year.

From the album Novos Ares on the Tratore label.

Described as the Picasso of the Australian independent music industry, Strangejuice use a wide range of contemporary and world instruments (from conventional Guitars, Piano, Sitar, Banjo, Tanbura, Bodran, all the way to the quirky, Shuffling Cards, Footsteps, screeching birds), to find joy in recording, busking and playing live, and understand the importance of deep lyrical content.

Harmonious vocals and brooding, prophetic lyrics are what we have come to expect from Strangejuice, after the double LP “Brown Songs” (a collection of early works) was released internationally in 2008, and this album certainly does not disappoint. After four years in the making, songwriter Mike Anderson (West Australian Song of the Year 1998 Nominee) considers this collection his best work so far.

Although a conventional songwriter, Mike Anderson’s 5 years of experience in composing music for film and television impregnates the album with a deep and atmospheric quality, and his desire for real instruments and aversion from synthesizers makes for an original, earthy experience.

D A W N S released their self-titled debut EP on the summer solstice. The Danton Supple (Coldplay, Starsailor, Morrissey) produced work is a dynamic collaboration between Montana songwriter David Boone and string-arranger, Audrey Riley (The Smiths, The Cure, Smashing Pumpkins).  The music combines lush melodies and orchestral arrangements with americana, indie rock and pop and you can listen to the EP in full over at Spinner.

Even better, there is this magical video for the trackand you can get the track as a free download in return for signing up to their email list.