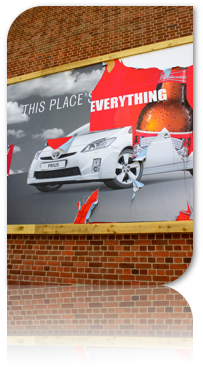 I actually managed to get away from the studio for an hour or so yesterday, over to Snape Maltings – our local pretty highbrow music venue which hosts much of the world renowned Aldeburgh Festival each year.

I was surprised to see this billboard on one end of the main building and I’ll admit it took a few seconds to realise that it is part of an exhibition called SNAP at the Aldeburgh Festival. (Take a look at the video.)

This piece is called This Place is Everything, 2011 by Ryan Gander.

There are no computer-generated sounds in his music – just a raucous (albeit melodic) mix of real guitars, bass, percussion and vocals.

After releasing a home-recorded EP in January 2011, Sam formed a band and did twenty gigs in southern California. He then released a second EP Waiting for Another Spring in April 2012.

DAWNS release their self-titled debut EP today, on the summer solstice. The Danton Supple (Coldplay, Starsailor, Morrissey) produced work is a dynamic collaboration between Montana songwriter David Boone and string-arranger, Audrey Riley (The Smiths, The Cure, Smashing Pumpkins).  The music combines lush melodies and orchestral arrangements with americana, indie rock and pop and you can listen to the EP in full over at Spinner.

After several months of being held under red tape, we are happy (and truly relieved) to announce that the album Lighthouse is finally available online.

We would like to take this special opportunity to thank everyone for all the support we have received throughout the years; Your contributions have made our journey more than possible.

This album is a story about our quests through life and the strengths we’ve found in the beauty of our experiences and each other; We hope that this journey inwards will continue to expand the venture outwards into the world, and maybe someday, for each and every one of us here (yes, you!), it will all make perfect sense.

That said, we are humbled to inform you that the band will be on hiatus for an undecided period of time to explore new experiences, gather inspirations and embrace the blessings that have entered our lives.

The boys and I would like to wish each and every one of you a warm and wonderful adventure ahead. We hope the sun will always shine on your face and the wind will always propel you forward with great wisdom, health and happiness. Thank you for all the good times.

Take care dear friends.. And keep in touch! Who knows what the future holds..

It’s been a busy couple of years for the band: they have released an EP, 2010′s well-received Keep Dreaming Baby — recorded a BBC session, played Glastonbury, released two singles with Moshi Moshi Recordings and toured extensively with the likes of The Drums, Grouplove and Black Lips.

There has been lots of talk about Diablo Swing Orchestra recently, perhaps in anticipation of their new release.

Here’s another tease from their The Butcher’s Ballroom album which is still available on Jamendo.

So who are this Swedish outfit?

Annlouice was chosen to front the band, her angelic yet powerful operatic voice was perfect to bring a bombastic feeling to the music. Pontus dance-influences and programming skills came in handy since the orchestra wanted the arrangements to sound a bit more futuristic. He shares guitar duties with Daniel who also is the main composer in the band. Andy brought some groove to the mix adding powerful slapping and funk-oriented bass licks, while Andreas’s energetic drumming made sure the songs are driven and pulsating. Together with Anders, he lays the solid swinging foundation of the band. Johannes’s theoretical knowledge and stunning technique combined with an emotive cello-playing style made him essential to the bands sound.
Check out the new album Pandora’s Pinata on their site.

After You – Chastity Brown (Minnesota, USA)

She is the inheritor of Leadbelly, Nina Simone, Bonnie Raitt and Roberta Flack. She is past, present and future. She is fire, earth, air and water. She’s a natural.

Throw all the genres and hyphenates together you want to describe her – gospel, roots & soul, jazz, blues & country – they are all right, and also not enough. Chastity channels songs that are borne deep in the American bone, the hunger, desperation and confidence that runs through our times. Coming from Tennessee to Minnesota, touring the country, she has had half her own lifetime and million lifetimes gone before to concoct her powerful sound. Ignite it all with love, and the rest is rapture.

Take a look a this live version of this week’s song. The woman’s soul is in it eh?