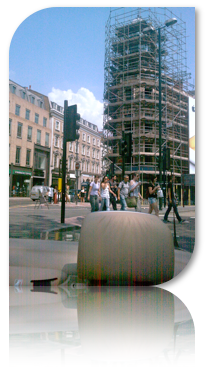 After what feels like at least a week of activities to mark the 60th year of the Queen’s reign, I’m hoping that we can get back to what passes for normality fairly soon. We’ve been bombarded with images and commentary telling us how much more exciting these grand state occasions are than our normal humdrum life.

I must admit that I find that I for one can make normal a lot more interesting than the stuff I’m told is much more fun. Hence, my latest acquisition, a button badge in the colours of the British republicans in the 17th century I look forward to explaining it 😉

Being driven through London last week I was delighted to see this semi-derelict building near King’s Cross Station being renovated – it had seemed most likely to be wiped away and I have a daughter who has long yearned to live at the top of the tower.

Strings of Atlas is a one man, heavy psychedelic blues band from the sands of the south west. Film Maker and writer Atlas Cage makes the guitars wail, bass lines thump and the drums drive the listener in to a tripped out world of bent reality and atomic science fiction.

If you’ve ever passed an old Chevy Nova on the highway or seen one sitting alone in a store parking lot, you just may have come across him and not even have known it. Part beat poet, part rock n rolla, and a full time wandering soul Atlas tours the country playing with anyone down to jam and screening films.

On the scene since 2006, he has three ep’s, a full length album three short films and a sound track to his credit, with another LP in the works. Catch Strings of Atlas on Facebook (Atlas Cage) and the music videos to “Atomic Girl” and “Find a way” on youtube as well as clips from the submission tapes to G4s ninja warriors.

Go to stringsofatlas.bandcamp.com where you can name your own price to download the album plus get a bunch of extras like music videos, pictures and info.

Having featured Ólöf Arnalds in my artists to watch in 2012, here’s more evidence that you should. It come in a somewhat unusual form, an instrumental piece … form this neo-classical singer.

Stranger is on their eighth album See Us Spin, the brother and sister led quintet continue a streak as the first Mexican group to release successful albums in English, offering plenty of gritty, graceful style in its tracks thanks to the snake charmer’s dance of Elán’s vibrant singing and deeply human lyrics, and Jan Carlo DeFan’s emotionally expressive, sonically adventurous guitar work that is reminiscent of the best sounds that came out of Jacksonville in the 70’s.

There is a staggering level of musical communication nearly hard-wired into the band members’ genes. ELAN has played together since they were children. Guitarist Mauricio “El Pato” López has collaborated with the DeFans since their early teens, while bassist Carlos “Charlie” Padilla Maqueo was in the first jam band with Jan Carlo at 11 years of age, and drummer Michel “Cheech” Bitar DeFan is a cousin. They have been best friends for nearly two decades and have played together for just as long. Jan Carlo shares, “We’ve really hit the point we’re at because of the constant touring we’ve done together over the past 15 years. We’re really a live band, and we’ve developed our sound by playing anywhere we could. In a 24 hour period we could be on a tiny stage in a cantina, and then the next evening on a huge stage in front of thousands.”

ELAN have recently crossed the border to take their music into the USA with dates across the south, up to New York and across to California. Over the next couple of weeks you’ll find them here:

Full details on their site.

Spanning the breadth of international urban bass music, Maga Bo‘s work makes connections between the organic and the electronic, the traditional and the avant-garde and the local with the global. In his live performances, original productions and remixes from his far reaching creative collaborations take new forms mixed live, often with the participation of MCs and live musicians.

Direct, in-person, on-location collaboration with other artists has been paramount in his work, having participated in artistic residencies in Morocco, India, Ethiopia, Senegal, Zanzibar, South Africa to name a few.  There are no canned samples here – all instruments and vocals come straight from the source.

Antioquia’s primary mission is to unite humans in the healing act of dance through a genre that they have dubbed, “Afro-Colombian Psychedelic Lovefunk.”

Their story starts when two travelers, Adley Penner and Craig Miller, met at a bar in Ecuador. They immediately saw the drive and creative potential in each other, and moved to Medellin, Colombia to begin writing music. They lived there for two years, playing music together for hours each day and busking in the buses at night. When they were ready to bring their new sound to the states, they established a team in San Francisco, and Antioquia became a full band.

Antioquia’s debut album Gringolandia, released in 2008, was called “a wild ride to the center of the earth and the depths of the soul.” (Brian Echon, West Coast Performer Magazine).  Their second full length album, My Piano Ate the Front Page of the San Francisco Chronicle was released in early 2010 to critical acclaim including Jambase Albums of the Week.

Just by way of a complete change a track from the classical world, specifically from a newly released album of Sonatas and Partitas by JS Bach on Bridge Records. I think there’s more cross-over than we might imagine. Free for you to download.

Gramatik has always been an early adopter. It began at the age of 3, when his mother would catch him glued to the radio in his older sister’s room, checking out the cassette tapes with American funk, jazz, soul and blues. He started making his first beats on an early PC by the time he was 13.

Gramatik just released his new EP #digitalfreedom. Since Gramatik has signed with PLM, his career has been based on the platform of free file sharing. Gramatik is dedicating this EP to the fight against the severe internet censorship bills we’ve been hearing about so much in recent months. With this EP,Gramatik hopes to spread awareness about the government acts that seek to regulate the internet

This EP also represents an evolution of Gramatik’s sound, as it strays from his usual chilled out hip-hop driven beats, and enters a more bass heavy realm. Good music does not just stick to one genre, and neither does Gramatik. With this EP, Gramatik wants you to open your ears to the new vibes, and embrace the versatility in his production.

out the finalists of the Brit Blues Awards and possibly vote for Trev before 30 July) at:

I notice that our friend Matt Andersen is also nominated, but in the Overseas Artist section

23 June around the lovely old pubs of Soho starting at The Argyll Arms in Argyll Street, just off Oxford Circus. Details in the Podcrawl Facebook page.

But basically it’s a midday start at the Argyll Arms and then on to The Clachan, The White Horse in Carnaby Street, down to The Crown in Brewer Street, St James Tavern in Windmill Street, etc, etc. Quite possibly ending up at The Pillars of Hercules in Greek Street and The Dog and Duck in Frith Street.

Check out the Facebook page and take this as your invitation to join us for some or all of the crawl. We’ll be tweeting all day with the hashtag podcrawl so you’ll know where to find us. Codger will be there as will Dave and Caroline Lee from the Bugcast, Gabor from Electrical Language, Justin Wayne, Ro Cutler, of course, and rumour has it that Sarah Morrison from Insomnia Radio New York will be there, although if she doesn’t get edition 15 of IRNY out before the 23rd – she may face some sniggering from the assembled company.

After just wrapping up a 3 month tour of visiting over 60 high schools in Canada earlier this year, the band has been cutting their teeth on the road and are finally ready to share some new material with fans. To support the new release Crystalyne will be kicking off an extensive tour on June 2nd in their hometown, Toronto.

The lead single off “Navigate“, “Wolves” has a compelling video to go along with the equally compelling track. The song showcases Dattoli’s impressive vocal range and the bands skilful blend of aggressive rock and melodic pop. “Navigate” is available digitally now.

June 29 @ The Academy of Music, WOODSTOCK