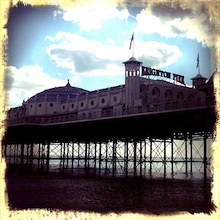 Fresh back from The Great Escape festival in Brighton this week’s show is a tasty selection of of the many and varied dishes available across some 30 venues in that buzzy city by the sea.

It was my first full TGE and as a convention delegate. Some of the convention sessions were actually pretty relevant.

Congratulations are due this week to my old buddy Pete Cogle who posted the 400th edition of PC Podcast at the weekend.

If you’ve seen the PC Podcast 400 shownotes, you’ll have seen a picture of one old relic of a time gone by. Here’s another.

The ten members of Brisbane’s Inland Sea are bound together by a love of complex harmonies and song writing. Since forming in early 2010, they have won hearts with their intricate five-part vocal harmonies, interwoven instrumentation and lyrical sincerity. A colourful and dynamic live show accompanies their unique approach to song writing.

Nine members of the band played an amazing set at The Great Escape last week which Pete Cogle, The Grumbler, Justin Wayne and I had the pleasure of seeing and hearing.

The first artists I saw at TGE this year. Playing a rather noisy Convention Bar at the Brighton Dome. Codger assures me that The Dome is where Abba won the European Song Contest in 1974 with Waterloo (not a lot of people know that).

Thursday’s Catalan Sounds lunch party was a much more fun affair and demonstrates the wisdom of lashing out on full delegate tickets for TGE.

The band are Nina Thomas (aka Ninette) on vocals and The Goldfish primarily playing various guitars.

Barcelona is a city that attracts independent musicians from all over the world, and yet they are making significant waves that look set to spill over the edge of their particular bowl. Judging from their performance on Thursday, this is largely down to the confidence and competence of their performance in a demanding situation with a largely jaded music biz audience.

Local duo Nordic Giants were playing what they describe as cinematic post-rock at The Studio Bar at Komedia. We just stumbled in pretty much by chance and were delighted with what we saw and heard. An unbelievably complex yet compact stage set-up involved more lengths of electrical string that I’ve had hot dinners as well as the projection of quite stunning silent videos with which the band played. Codger almost remembers when the accompanist for the cinema played an upright piano. This really was something else.

Hidden behind feathered masks and effortlessly changing between instruments, the duo performs live original soundtracks to a backdrop of award winning short films (Provided by Shorts International). From dreamy ambient swells, epic builds and huge moments of power to a combination of dark, funny and beautiful short films, which can bring tears, smiles and actually scare you at times. Imagine the visual story telling of a cinema experience mixed with the raw energy and passion of a live gig- and you’ve hit the nail on the head!

Their Myspace describes them as Chinese pop / Christian Rap / Trance on the other hand, Facebook has them as garage – rock and roll

Mujeres met at university studying cinema and to quote their Facebook profile “After graduation we thought that the best way to keep the four of us united was creating a rock and roll band. That’s how Mujeres was born. Everything else is unimportant.”

Quite right too and ‘nuf said.

Another artist who coped with the acoustics and crowd noise of the Convention Bar at the Dome.

The Robbie Boyd Band are a feel-good ‘Funky Folk’ ensemble from London. Their debut singles ‘I won’t let you go’ and ‘Orion’s Belt’ have had strong support.

Robbie’s charming songwriting and distinctive vocals combine with colourful arrangements and nostalgic harmonies, provided by an eclectic mix of talented musicians, to produce an exciting and uplifting contemporary Folk-Pop sound.

A second track from the ever fascinating Inland Sea.

You know all about Ben Caplan by now except to say that he and the band are the most delightful bunch of people I’ve come across in a long time.