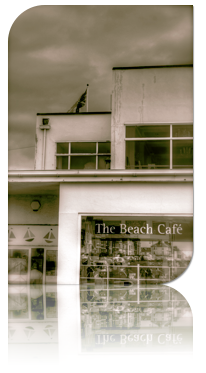 The halfway point in a frantically busy week. As you’ll hear I’ve been over to Southwold a couple of times since last week’s show and as soon as the red light goes off on SnC 322 I’m off to Brighton, on the south coast of England, for an intensive three days of music, panel sessions and great conversation with interesting people.
The Great Escape line-up is pretty extensive. Who should I try to see?

Some bits of Southwold are decidedly retro. Here’s the pier building, something of a classic of its time.

Cab 20’s songwriter and frontman, Bert has the duty of not only writing most of the riffs and lyrics, but also representing the band on stage. With a playstyle that manages to be both technically skillfull as well as raw, He uses Sears Roebuck catalog guitars from the ’60s to create the band’s notoriously gritty sound. If Bert isn’t playing music, chances are you can find him either buying more music to put in his extensive vinyl collection, or listening to live music at a concert or music festival.

Eric is the driving force behind all of of Cab 20’s music. Playing a customized drumset that has iconically been a part of rock history for the past half century, he pushes the songs along with an aggressively booming rock n’ roll pace while playing complex rhythms and elaborate fills that are typically heard in the bluesey/jazzier side of the musical spectrum. With a scorching sense of humor and a penchant for turning any event into a good time, Eric can always be found either laughing or making others laugh.

A stoner rock aficionado and borderline metal-head, Jason takes huge musical influences from the desert rock scene. He uses his excessively large bass rig to round out the band’s low end with a distorted thump. Citing both Geezer Butler and John Entwistle as bass icons, his influences are easily noticed in the ’70s era equipment he uses and the musical flourishes he plays between riffs. When he’s not playing bass, he spends most of his time simply relaxing, playing video games, or cooking up a storm.

It’s difficult to think of Iceland without thinking of superlative music. This remote North Atlantic nation has punched well above its weight over the last two decades. If anything, the island’s incessant soundtrack is growing ever more dynamic, as artists and bands, inspired by the continual international success of their peers, continue to create original, world class music. www.icelandmusic.is

Sóley is a passionate piano player and singer who you may know best as a member of indie-collective Seabear. But she has recently been emerging as a solo artist in her own write. In 2010 she released her solo-debut “Theater Island” – a pop record that sounded like a dream: sweet and weird all at the same time. Now she is about to release her full length album,We Sink, via Morr Music — an album “full of rhythmic makeshift creatures and handclaps hidden in the undergrowth — think cardigan-folk from the northern hemisphere, an ocean of stained glasses bopping up and down in the shared apartment’s dishwater, leeward in limbo.”

There was a rather fun night last week at Southwold when Adnams launched Ghost Ship, their new addition to the range. As Andy Wood (Chief Executive at Adnams) pointed out pronunciation is everything.

The Ghost Ship has been spotted a couple of times in the past year or two as a seasonal brew but due to huge demand it is now available all year round. One of the problems with their beers is that they are made out of real, natural products and the particular hop that’s essential to Ghost Ship is only available once a year.

This year Fergus has bought lots of lovely fragrant hops which will keep the beer coming.

Actually, I think he’s hedging his bets. As well as serving pints at the launch, they had Ghost Ship cocktails which were delicious. Real ale cocktails complete with pineapple slices. How does that work then. Oh, never mind. Take my word for it, it does work!

The live music featured former Artist of the Month selector Ruth Goldsmith blowing a mean sax in this romp through a tune which I am assured is called “The Rochdale Coconut Dance”.

There are some pictures (including incriminating evidence of me having a good time) and a chance to win a case of Ghost Ship at: http://adnams.co.uk/beer/adnams-ghost-ship-has-returned

Take a look at this video of the brewery, as you’ll not have seen it before. It was quite spectacular on a cold drizzly night.

The first track from an album of original late 70s recordings which set a direction for the Kinshasa music scene. Described as “A dance machine of incomparable strength : The All-Powerful OK Jazz is conducted by Franco.

Re-released on Editions Populaires late last year you can download this track free and legal from the IODA site using this download link.

Brooklyn-based singer-songwriter Colin McGrath has a knack for penning tales of freewheeling characters with a natural tone that is both whimsical and heartbreaking. NPR Music has described him as an “Itinerant folk orchestrator,” who writes “songs that are steeped in storytelling, with characters and images drawn from old Americana.” Colin studied music at Oberlin College—he’s been commissioned to write chamber pieces for The Central Park Brass and The New York Philharmonic’s touring educational performances—but he’s received his real schooling studying the tragically poetic stories unfolding in junkshops and dive bars nationwide.

The album’s enigmatic music appropriately underscores Colin’s playfully cryptic lyrics. The Yellow Brick Man album loosely depicts the adventures of a freight-hopping, prison escapee who gets drunk and stranded on a desert island, has a transformational encounter with a Catholic saint who pulls him across a river before he finally finds (near) peace in the arms of a hard-headed woman.