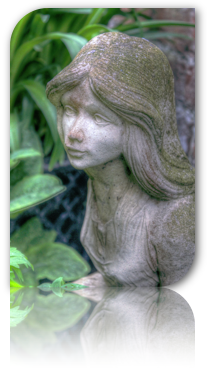 News of the first release of the John Peel record collection coming online together with a selection of interesting tracks from artists around the world.

“Maude” spent the day under a brooding grey sky and ended the day in torrential rain while the show was put together.

Inspired by Saint Joan of Arc, the national heroine of France, the band have  performed in the Mediterranean, the Caribbean as well as extensively touring Europe.  Most recently, they have become the first European female band to feature on the Xbox 360 for their track Sisters, helping increase their profile even further.
Their live shows have been creating a lot of excitement, notably with the addition of their percussion player Violet The Cannibal to their live sets, who has gained a reputation for regularly setting alight her drum kit, and on one occasion burning their guitarists’ hair on stage…..

Yes, you’ve heard SaReGaMa on the show before.

“If you’re curious about my musical tastes and influences these are the artists I listen to more often than others:

La Barca de Sua is an artistic proposal which arose from the musical interests of four people from Granada. In September 2004, Raúl Lucas (spanish guitar, composer), Luigi Ramos (electric guitar), Ignacio García (bass) and Inwit Puntotk (percussion) began to play together, as a pastime, in an old house of Granada´s Albaycín, close to the Elvira´s arch. After a year, with the incorporation of singer Carmen Caballero, the band and its music reached a new level of expectations and they offered their first live performances. From summer 2006 the band was completed with the recruitment of Emilio Parrilla (clarinet, sax).

From best friend beginnings in the suburbs of Toronto, Sandman Viper Command emerged with their debut release Everybody See Thisduring a time when typical twenty-somethings are pulling all-nighters cramming for exams.

Sandman Viper Command have returned to their Hamilton roots and holed themselves up again in Barn Window Recording Studio; the same studio where their debut release Everybody See This was conceived just a few short years ago. With fresh material laid down the group is anxious to share and will be doing so in the form of a new 7 inch, entitled Feel is Good, which is being released this month to coincide with the tour dates.

May 22 @ The Spill, PETERBOROUGH

May 24 @ The Mansion, KINGSTON

An interesting approach from The Neighbourhood who provide very little information through the usual channels of their website, Facebook page and YouTube. However, I can tell you that they are creating something of a buzz. I have discovered that they are fronted by 20-year-old actor/musician Jesse James Rutherford, who until recently was part of a hip-hop band called The Good Boys. You can get the sense of that influence coming through in Sweater Weather.

They are based in Los Angeles and have a few dates in California coming up very soon.

Well, the first hundred tracks are indexed on a new site athttp://thespace.org

The initial objective is to present John’s catalogue of the first 100 albums under each letter of the alphabet. Yes, it’s very random but then that’s how, when you put in enough hours, you discover such unexpected treats.

There’s a short interview with Sheila at: www.bbc.co.uk/news/uk-england-suffolk-17894985

There were a few teething problems with the site which launched a day or so ago but stick with it, and have fun.

Setting is important to the members of Blade of Grass when they seek inspiration. Michael Hurst and Joshua Murphy were tripping through Belize and Guatemala when they wrote two of their most recent tracks “Who You Gonna Run To” and “Belizean Girl.”

Michael and Joshua are the primary composers for the band, and the goal of that excursion to Central America was to experience tropical snorkel outings and to seek enlightenment from pre-Columbian Mayan temples. Along the way, with guitars and a tape recorder, songs were written.

Blade of Grass has its roots here in LA where the two friends met at UCLA. Michael was studying Ethnomusicology and Joshua was studying acting at the School of Theater, Film, and Television. The two bonded over trips abroad, world music classes, and participating in the vibrant local scene of music and activism. Michael Hurst also took part in the UCLA jazz program, studying with the likes of Kenny Burrel and Herbie Hancock.

“Dance to the Radio” is a modern take on a hot French jazz rave up from a bygone era. It sounds like the music that Django Rheinhardt would have made if had Jimi Hendrix’s electric guitar setup. This song is the live crowd’s favorite and always the concert closer – with people shouting “to the RADIO” on cue throughout the song.