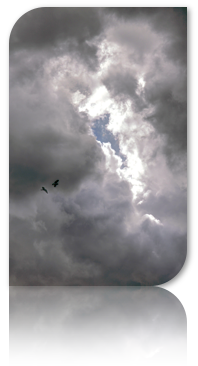 Oh, the joy of living with nature. A confused and very angry blackbird has a mate nesting in the end of the barn. He insists on picking fights with everyone else and the noise, quite frankly, annoys.

Never mind, I hope you’ll find this weeks mix interesting, we’ve tracks from Spain, Iceland, Hungary, Italy and the USA which is represented by Minnesota, New York, California and Tennessee.

Now where’s that shotgun? Seems someone already made a hole in the clouds.

The Freak Fandango Orchestra is a multi-ethnic band from Barcelona (Spain). The band exists since 2006 and is performing live since 2007. You can see them a lot around Barcelona but they also play at international venues, like for example at the New York Gypsy Festival 2011.

Their music is a explosive mixture of folk, polka, gypsy music from the Balkans and punk-rock. The band is composed by musicians with lots of different instruments (guitar, bass, drums, violin, saxophone, trumpet, accordion and percussion). They are influenced by artists like “Emir Kusturica And The No Smoking Orchestra”, “Goran Bregović” and “Gogol Bordello”.

In 2009 they published their first EP “Love, Death And A Drunken Monkey” and their second EP “Tales Of A Dead Fish” in 2011. All their song are under Creative Commons License.

Where Is The Way – Ourlives (Reykjavik, Iceland)

Since the band’s formation in Reykjavik in 2005, Ourlives focused on recording as much music as possible in the quest to perfect their sound. With influences ranging from bands like Muse to Radiohead and Coldplay, the band continuously experiments with different sounds, and has refused to release an album until they are satisfied that it feels and sounds exactly the way they intend it to.

In 2008, they finally released the first single from what would become their Icelandic debut album, We Lost The Race.

The band’s debut US EP, Out of Place, is their introduction to the world outside of Iceland. Get ready for Ourlives to take you on a musical journey, with their dynamic song structures, big choruses, and the intense ambition and attitude — to do the very best you can do, or don’t do it at all. Out of Place is available now on Seattle’s Spartan Records.

Csaba Boogie Gal and Andor Olah have been playing together for over ten years, bringing roots-based blues to their audiences and inspiring a younger generation to follow in their footsteps. Mississippi Big Beat‚s line-up mixes this experience with the electronic background of Szabi Maté and Dure to create a fresh effect. In this year of the 100th birthday of the late blues innovator Robert Johnson, Mississippi Big Beat continues to modernize the genre by boosting classic blues beats with electronic loops and effects, building up from the music of the twenties and thirties and arriving at the big beat sound. The Hungarian apostles of the blues beat are now launching into the international seas of nu blues.

At this point these track will be released digital. So the only way for your listeners / readers to get them is by downloading them on iTunes or any other legal download platform.

I can find nothing about Fabrizio except that he is from the very north of Italy, just north of Turin and he says:

When I think about “bal folk” and especially klandestine mazurkas, I think about open spaces, joy and freedom; so I’ve decided to edit this little compilation of french mazurka, valzer and scottish under CC license. Free music for free people!

She’ll put a spell on you. Sweet as molasses and woodsmoke, clear and burning as summer sun, Chastity Brown casts magic. Her voice brings you to the crossroads with every turn, warms, comforts and challenges you. She is the inheritor of Leadbelly, Nina Simone, Bonnie Raitt and Roberta Flack. She is past, present and future. She is fire, earth, air and water. She’s a natural.

Throw all the genres and hyphenates together you want to describe her – gospel, roots & soul, jazz, blues & country – they are all right, and also not enough. Chastity channels songs that are borne deep in the American bone, the hunger, desperation and confidence that runs through our times. Coming from Tennessee to Minnesota, touring the country, she has had half her own lifetime and million lifetimes gone before to concoct her powerful sound. Ignite it all with love, and the rest is rapture.

The Canadian singer/songwriter now makes her home in Berkeley, California, a perfect backdrop for her quirky and unusual style. While Lila writes within the boundaries of classic pop song structure, her songs could be called anything but traditional.

Heart Machine is an album of great authenticity and maturity.

Gramatik has always been an early adopter. It began at the age of 3, when his mother would catch him glued to the radio in his older sister’s room, checking out the cassette tapes with American funk, jazz, soul and blues. He started making his first beats on an early PC by the time he was 13, and soon the kid from Portoroz, Slovenia figured out how to harvest the power of free file sharing to build a following throughout the US & Europe. Tracks spread, hype grew, tours followed, and before long his digital persona forged the initial inroads into the US market, landing him both a label and an agency.

Gramatik landed on US soil as a fully formed artist who knows how to do things his way. He signed to a label, Pretty Lights Music, that gives all of its music away for free, which went hand in hand with his own philosophy about ”freeing music by making music free”. Soon after, he scooped up his hometown crew and moved to Brooklyn, NY. Alongside Gramatik, the multimedia collective known as Dream Big features guitarist and producer F.A.Q, video director and filmmaker Anze Koron and graphic and web designer Martin Kenjic, with whom he has been friends since they were kids, sitting in a small town on the Adriatic coast, dreaming of breaking out into the wide world beyond. Now’s the time.

Don’t Want To See You Till You Go – Tiger High (Memphis, TN, USA)

Tiger High is a tight-knit group of musicians all born and raised in the music mecca of Memphis, Tennessee. The group is composed of songwriter, producer, and multi-instrumentalist Jake Vest (Jack Oblivian, The Trashed Romeos), drummer Greg Roberson (Reigning Sound, Arthur Lee’s Love, The Trashed Romeos, Jack Oblivian, Compulsive Gamblers) and two of Vest’s longtime musical partners, brother Toby Vest and Greg Faison. Together, Tiger High co-writes and records their material at High/Low Recording, a studio owned and operated by band member Toby Vest. The studio serves as the band’s home base of operation as well as the home of their wrecking crew style production team.