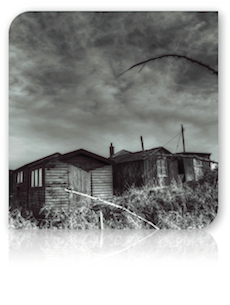 Fat Tuesday yesterday and I can assure you that Suffolk’n’Cool is giving absolutely nothing up for Lent. If anything, I want to get more great music and features into the show.

The major building project that I’ve been involved in here near the Barn (an annexe for an ageing relative) is almost complete so I’m going to be back and raring to go with bringing you the finest new music like a breath of fresh air from the coast. Brace yourself!

In the shadow of the Sizewell power station in a bleak February Suffolk can still look beautiful. So I think it must be.

Having been a recording artist since the ripe old age of 11, the 25-year-old Baltimore, MD resident is now preparing for the release of his second album as a solo artist, and he manages to avoid the so-called “sophomore slump” with his brand new offering, Building, to be released April 17, 2012 on Protocol Records. Amazingly, despite Larsen’s youth, Building is already Larsen’s tenth album overall (counting the albums he issued with the group he previously led, Twilight’s Moon).

Peter Bradley Adams was formerly one half of the duo, Eastmountainsouth, signed by Robbie Robertson (of The Band) to DreamWorks Records in 2002. Peter co-produced their debut album with Mitchell Froom, and the duo toured extensively opening for Lucinda Williams, Tracy Chapman, and performed their final show at the Hollywood Bowl opening for Lyle Lovett and Shelby Lynn. Since then, Adams has released three solo records: “Gather Up”, “Leavetaking”, and his most recent, “Traces”, in October 2009 on Sarathan Records.

If you go to Sarathan’s site at www.sarathan.com and click on Artists thenPeter Bradley Adams, there’s a free download of his song Always.

The Wailers recorded at The Paris Theatre, London. 1973

I had almost forgotten this gig until Jim Dudman reminded me, having spotted the recording being played on BBC Radio 6 Music.

It was such a pleasure to get to the BBC’s well equipped Paris Theatre in London after weeks of gigging around colleges, clubs and bars in the likes of Brixton and Bristol. On top of that, of course, the BBC recorded the show. I find it quite astounding that it should surface again this far down the road.

Listening now, they clearly had that collective Wailing Wailers sound which pretty rapidly disappeared once Bob was out front as the star. Contrary to what the BBC site says, at that time they were simply called The Wailers – and Bob didn’t have dreadlocks! It would have been good if they could have deployed both vocal styles but the route chosen differentiated therm from all the other harmony-based Jamaican bands. Evidently yet another “sound” judgement from Chris Blackwell.

What is glaringly obvious from listening again to these live tracks (especially Stir It Up) from the Catch A Fire album is how much guitar genius Wayne Perkins added to the album versions. Peter Tosh is simply not a rock lead guitarist and Wayne’s licks helped the band break through into rock audiences. However, the live vibe really comes through and is also to be rejoiced in. Overall it sounds as fresh and not polished as it was almost 40 years ago.

Triplexity is : Nikila, SaReGaMa and Hamelin Bérengnier joined, on this new recording by Italian keyboard maestro Paolo Pavan, who himslef has quite a body of work, also on Jamendo

The word Triplexity is a portmanteau of triplex and complexity. Triplexity is a virtual band consisting of 3 members who have never met each other face to face. Their collaboration comes to life through the Internet.

It would be difficult to define Triplexity’s musical style inasmuch it’s extremely diverse and versatile. One time it may sound jazzy, another time harsh and electronic, sometimes ethnic and organic and sometimes abstract and ambient. There are some qualities though that always persist in Triplexity’s music : uniqueness, complexity, intelligence and a threefold talent of the trio members. Every member has a different musical background, together they blend their knowledge, talent and inspiration and give life to fresh and unequaled music.

Get this track from www.jamendo.com/en/album/107298 and check out all their other material on Jamendo.

If This Is The Light – Les Jupes (Winnipeg, Canada)

Les Jupes are a new band from the centre of Canada versed in expansive musical landscapes, sharp lyrics and an observer’s eye for the world. They are four Anglos with a French name making big, broad and determined music. And they are at the centre of a prairie renaissance growing around Head In The Sand Records.

They capped off a great 2011 with the release of the single “If This Is The Light.” Their debut album Modern Myths was released on Head In The Sand in Canada/USA and Instrument Village in Germany/Switzerland/Austria.

Modern Myths was built on lead singer Michael P. Falk’s baritone charging through waves of psychedelia and driving rhythms. Pounding, introspective, at times fierce, at times playful. It was recorded over a year and a half when Montreal producer/engineer Marcus Paquin (frontman of Last Gang’s Silver Starling) found time from working on Arcade Fire’s The Suburbs.

The Controversy’s first album (still released under Laura Vall) “Real” has received critical acclaimed reviews, describing it as “stunning”, “off the hook”, “Rich songs with powerful lyrics and musical serenity”, “refreshing change from the overproduced pop” and “unique, powerfully emotional, honest and ethereal”.

Two Loons for Tea is Sarah Scott and Jonathan Kochmer.

From their 2007 album Nine Lucid Dreams.

“Our involvement with music is about making a connection with something larger than ourselves,” Jonathan says. “It’s that whole-body tingling feeling we get when we’re recording or performing and alerts us that we’re on the right path.” But it’s not just for them. It’s for the audience. “To hear back reports from others that they’ve experienced the same tingling at home or at shows is wonderful. It’s about creating a community of feeling.”

Jan Mittendorp at Black and Tan Records near Amsterdam has been in touch with news of a new release of classic blues remixes which miX&dorp has created at Black & Tan over the past 14 years. These really are very special – of course, they won’t suit the purists but for me they inject new life into the blues.

They are available on iTunes at http://itunes.apple.com/nl/artist/mix-dorp/id416567823

Jan tells me that the release date is 28 Feb but I just had a look and they’re there right now.