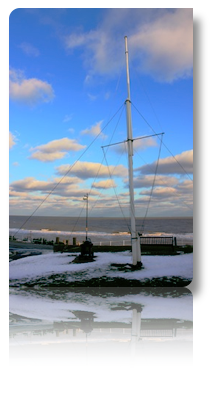 I really don’t want to blather on about the weather like a meteorologically obsessed Englishman but, holy shit has it been cold this week.

I’ve rarely felt cold like that in Southwold yesterday. In fact, a blast of really cold air came through in mid-afternoon and the temperature dropped by at least 3 degrees C in about 10 minutes. It was actually damned painful. But as Dave Chamberlain observed in response to my tweet about it,

“You haven’t lived until you’ve walked along Felixstowe prom with the wind coming in from Siberia. I’m a former resident of Gt Yarmouth, if it wasn’t coming off the sea I got it coming across Breydon Water.”

Dave – a glutton for punishment or a fool to yourself?

From their self-titled album of the same name.

Wandering Monks is the fusion of the creative juices of two very different minds that developed separately but established a contrast that works. McAD, a Midwest native, is the leader and founder of the long-standing Freedom Movement, a Boulder-based hip-hop group that has been soulfully addressing social and political issues for over a decade. Linguistory is a Colorado native whose lyrical style and complex rhyme patterns are steeped as much in literature as in popular music. The two ironically met via a musician wanted ad on backpage.com and it’s been on ever since.

My name is William Michael Dillon and I spent almost 28 years in prison for a crime I did not commit! I was cleared through DNA testing in Nov 2008.

I’ve been working on getting a CD released since that time and I’m finally there. I write all my songs and play them as much as anyone wants to hear them. Its quite a switch from where I was. I’m looking to tour through FL,GA,NC,VA,Chi,Ny. I would love some insight on places that anyone may know about that they consider a good gig.

Give me a shout if you have suggestions for gigs and I’ll pass them on to William.

Shayfer James can be described pointedly as a myth in wolf’s clothing. Referred to by his rapidly growing group of followers as The Villain King of New Jersey’s underground noirpop music scene, Mr. James is devilishly captivating and deliciously unusual. From the worn bottom of his ripped black boots, to the wrinkled top of his black pinstriped hat, Shayfer James is the portrait of vagabond royalty. A man of bewitching grace, grisly humor, profound story telling, and whiskey-flavored wit. The self defined “spawn of the elephant and the empress”, Mr. James attributes his musical and lyrical abilities to his early exposure to pipe smoke, demons, and jesters” and his oddly chivalrous nature to his life-long apprenticeship to L.V.S.” (his mother’s father).

Wikipedia has this to say:

It began as an outlet for John Dwyer (of Coachwhips, Pink and Brown,Landed, Yikes, Burmese, The Hospitals, Zeigenbock Kopf) to release his instrumental, experimental home recordings, and over the course of several albums evolved into a full band. The band is noted for both its prolific album releases as well as its energetic live shows.

They have recorded and performed with numerous members in the past. Former band names include: The Ohsees, OCS, Orange County Sound, and Orinoka Crash Suite.

Kevin West selected Novi as Adnams Artist of the Month yesterday. What a great choice!

Raised in Ashland, Oregon (now based in Los Angeles), this nova star of the electro-pop galaxy, Carolyne Neuman, now known as NOVI, is hitting the scene like a bullet straight from a rifle. The star marries the charm of her small-town upbringing with the edgier elements of big-city Los Angeles in her forthcoming EP, “Now I’m Here.”

The single “Blackbirds” was mixed by music legend Brian Malouf (Michael Jackson, Madonna, Prince). “When I first heard Novi’s music I was struck by the strong originality and the defining musicality. They are great and very original sounding songs and her voice soars! I love listening back to these tracks now – they really hold up,” says Brian of Cookie Jar Recording.

More music from Novi can be found on various web sites and social networking sites such as Reverb Nation, Facebook, and Soundcloud.

She has a freee download available – a remarkable bold interpretation of the Beatles classic, “I am the Walrus” Available from her site.

I Wanna Be A Floatplane – Matt Andersen (New Brunswick, Canada)

Matt is back to the UK at the end of the month and dates through much of March. He makes a very welcome return to The New Crawdaddy Blues Club (www.newcrawdaddyclub.co.uk/) near Billericay, Essex on March 29.

Jeremy and I called by last week and caught a great set by the Kyla Brox Band. Such a great club with a wonderful, appreciative audience.

Matt’s site is at: