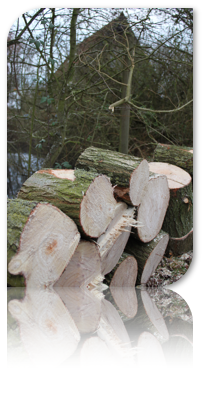 A sky full of stars and aircraft tonight here in Suffolk. Unfortunately I was aware of that long before recording the show. Yip. Another late one but with a comely variety of styles and approaches from london and the UK, France, California and Canada. I hope you’ll enjoy the tracks and explore the artists sites.

Almost all the tracks in this show are available for free download.

Today was logging day as a couple of out-of-control willow trees near the barn had to come down. The logs are massive even though the tress were only planted about 14 years ago.

Originally released on the 2009 albumDirty Little Secrets, a compelling album on Jamendo atwww.jamendo.com/en/album/56612

Take a look at the video of a live performance of the song athttp://youtu.be/qMEs31Gsb4w

You can also download the album free, under Creative Commions at the band’s site:

The bass / flamenco fusion thing really appealed to me and there are plenty of fine and very varied tracks on the album united by the prominence of the bass. Well worth checking out at www.jamendo.com/en/album/56775

I see dead people (Spotted in the Spinsider newsletter)

OK, it’s a bit on the morbid side but the Live! I See Dead People Tumblrfeatures a selection of iconic album, covers altered by Jean-Marie Delbes and Hatim el Hihi so that the deceased members of the bands are no longer pictured.

Dave Swarbrick is a legend. He has been described as “the most influential British fiddle-player bar none”.

Perhaps best known for his 10 year stint with Fairport Convention, Swarb was instrumental in the creation of their seminal album Liege and Leaf. In fact, he was initially a session musician bright in to add some overdubs to a track.

Swarb is yet another musician who emerged from the Art Schools of the 60s and 70s. I first saw him when he was playing with Martin Carthy first time around. They are still playing shows together and, I suspect, having a great time. The hallmark of their early collaboration, and much of Swarbrick’s work since was the innovative interpretations of traditional folk music, rather then slavish adherence to some arbitrary “correct” playing.

For a magnificent demonstration of his improvisation and skill, check out the eleven minute epic track A Sailor’s Life on the Fairport Convention album Unhalfbricking.

From the 2010 album Raison D’etre on Shirty Records. You can buy it direct from his site at:

“Spanish Ladies_Geese On The Bog_L” (mp3)
from “Raison D’etre”
(Shirty)

Heart Machine is the title track of Lila Rose’s new album, available from her site.

Born with “ultra sound sensitivity”, Lila’s experience of the world around her has been quite out of the ordinary, and very much sonically based. Lila is both blessed and afflicted with sounds that most people cannot hear; while this is a gift when it comes to making music, it can also lead to great personal discomfort at times.

The singer/songwriter now makes her home in Berkeley, a perfect backdrop for her quirky and unusual style. While Lila writes within the boundaries of classic pop song structure, her songs could be called anything but traditional.

I’ve only listened to five tracks from the album so far and an hugely impressed by each. On the basis of those seven, I’d say that the two years of gestation are well spent. This is an album of great authenticity and maturity.

We’ve had website problems over the past couple of weeks and now the site is re-directing to somewhere else.

To access the shownotes, artist links and a player, you can short-cut to

Rah Rah’s sophomore album, Breaking Hearts was recorded and mixed in Montreal by Kees Dekker (Plants & Animals) and was released on June 1, 2010 in Canada. It follows the widespread industry praise for 2008’s debut album, Going Steady and reinforces the increasing visibility that has accompanied Rah Rah’s relentless tour schedule. Rah Rah were crowned “Best new Canadian Band” and “Best New Alternative Band” by iTunes in 2009. The band has also been featured as iTunes Download of the Week and Starbucks Pick of the Week in Canada.

The band members share a collective mentality, taking turns taking the lead, both in songwriting and while on stage and constantly switching instruments.

The proud prairie rockers sing of the seriousness of art, poetry, love, and politics, and contrast it with a stage full of confetti, pinatas, candy, and six friends loving life and having fun.

This young, six-member ensemble artfully bridge sincerity with the absurd. Despite lyrics that touch on underwater sea creatures, stockbrokers, Saskatchewan (and now Montreal), and impressionist painters, their songs are built to break your heart. All this along with the melodic male/female vocals and diverse instrumentation (guitars, bass, drums, keys, violin, accordion, ukulele), ensures that a Rah Rah show will not disappoint.