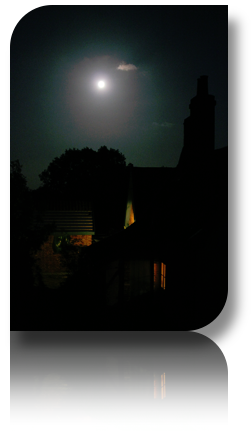 Another short show this week I’m afraid. There seems to be something of a conspiracy to throw all my family responsibilities at me at once. Something of a perfect storm but some of it is good news.

I’m sure you’ll enjoy the music anyway. I’m expecting to be back next week when the immediate panic is, hopefully, abating. Meanwhile thanks for your patience and enjoy the music.

We have a lovely full moon at the moment. This is how the house and oak trees looked earler this evening.

Dreamers of the Ghetto are a family band from Bloomington, IL, consisting of brothers Luke and Jonathan Jones, Luke’s wife, Lauren, and Marty Sprowles. Dreamers of the Ghetto marries the sentiment of classic 80s film soundtracks to minimalist, romantic dream-rock, creating a unique environment that becomes almost instantly addicting. The triumphant, reach-for-the-stars attitude of veterans like U2 and Depeche Mode is paired with the gospel splendor of Spiritualized and ominous austerity of The xx, all carried by what Shaking Through calls “the most amazing singer we’ve seen since Sharon Van Etten.” DOTG have mined a sound that is both timeless and nostalgic, and they’ve done so with an earnest fearlessness and refreshing lack of irony. They are true, pure, and unbelievably powerful.

Only playing a handful of live shows outside of Bloomington to date, Dreamers of the Ghetto were handpicked to play as main support to The Flaming Lips and Superchunk at Raleigh’s Hopscotch Music Festival on September 10. After listening to Enemy/Lover Grayson Currin of Pitchfork and Hopscotch Music Festival says, “it sounds like the start of something major.”

An exploration into the evolution of music, art and comedy, has come at last!  Featuring over 19 acts including bands, special guest DJs, visual artists, and comedians, Multiverse Playground’s 3rd installment delivers a collaborative and community-driven, multimedia event of epic proportions.

Musically, they have brought an array of acts, both within and outside of the Paper Garden roster.  Showcasing Paper Garden Records’ Pree and Little Tybee, we have also brought on outside guest DJ sets from Bear Hands, Delicate Steve, and DJ Bearbait (Pattern Is Movement) as well as performances from Snowmine, Twi The Humble Feather, ARMS, Team Genius, EULA, Caged Animals, Data Dog, Afuche, Whale Belly, Lowell, Progress, and Marra Barr.

In addition, they will have comedy sets from Chris Betts and Aaron Kominos-Smith (Funny Aaron) amongst visual art from Ugly Art Room, PBR Art, and more.

Throughout the day, we have invited sponsors from some of the best up-and-coming music-related tech startup companies to join us and create fun and interactive ways to use their services.  We’ll be joined by the lovely folks from Thinglink, Grooveshark, and Livetapp.

Oh, and did we mention FREE BEER (for those of you 21+) fromPBR and FREE VITAMINWATER yet?  Because yeah, that’s happening too!

Folly was written and recorded over the course of several heat waves and snow storms by May and her cohorts in a rotating cast of bedrooms, basements, and attics across the District, bearing witness to two foreclosures, a bit of squatting, a larger bit of eviction, and a subsequent life shuffle that would rival that of a wind-addled gypsy moth.  This patchwork, guerilla style recording, which grew out of necessity, ultimately served to instill a sense of tension throughout the record leaving one hanging on despite the imminence of something so delicate falling apart.

Pree’s new album, Folly, will be released on October 18 via Paper Garden Records.

From the self titled album Jaranatambo. Released in January.

In the International Composition Contest (I.S.C) U.S.A 2010-2011, JARANATAMBO managed to become one of the most representative bands of the Latin American Culture and received prize in the category ” WORLD MUSIC COMPOSTITION AWARD” with it’s song Ooee, ( 3 place ) recognition that gains even more significance due to the large amount of candidates, over 15 thousand songs. Ooee is a call from the world to the world, made trough indigenous and urban tunes along with the traditional sound of JARANATAMBO, influences this time by the Brazilian culture.

The entire album is available as a free digital download from Bandcamp. You’ll find it at

Rich Palmer did a great job of pulling the special 300th edition of AMPed together this week. Weighing in at very nearly an hour and a half in its stockinged feet it’s a goody. The plan was for members to suggest songs that they’d heard on other members’ shows. My thanks also to fellow AMP members Pete Cogle and Johnny Dobson for selecting tracks from Suffolk ’n’ Cool to be featured on the 300th edition.

A Moll – For a Minor Reflection (Reykjavík, Iceland)

Having mentioned that FAMR won a the opportunity to play the inaugural Black Rabbitt Music Festival in Bejing this coming Saturday and then in Shanghi on Sunday is seems only right to play a track from their 2010 album “Höldum í átt að óreiðu”. A Moll illustrates their use of ambient sounds and remarkable crescendos.

Starting as a hard rock duo in a tiny garage, For a Minor Reflection has morphed into the instrumental post-rockers du jour. This energetic, melodious rock group is comprised of four 22-year-olds from Reykjavík, Iceland. Far from simple to define, their music expands and subverts itself with every song. Since their debut album release in 2007, they have toured with Sigur Rós, released a sophomore album, performed throughout Europe, and played showcases at Eurosonic and SXSW.