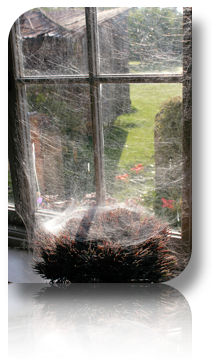 A spider took over a cactus in the kitchen a couple of weeks ago. Every few days the web was cleared but this is the state it got into when left alone for almost a week. YThe funnel into which wasps, flies and small horses seem to have been dragged is almost full. It really is most impressive.

New England Singer/Songwriter Jay Psaros is gracefully emerging from the Boston area. After the successful release of Tripping and Running in 2009, Jay toured the country bringing a fresh, energetic twist to solo acoustic music. Aside from songwriting and performing solo as a “modern day minstrel,” Jay also served as his own booking agent and financier while on tour, planning the tour around a lot of national parks, so he could, “sleep in those beautiful places.”

“I have always loved music and travel…so being a touring musician seemed to fit perfectly,” noted Psaros. “I try to take delight in the process and receive any glorified moments with the understanding that it was just a good day in the office. Having been on the road before and in the beginning stages of my career, I cannot think of another way of life.”

Jay released his sophomore album On up the Road in late spring. Along with the release of his new album, a three month nationwide tour kicked off in May, bringing the songwriter on a wide variety of gigs from his hometown Boston to Los Angeles to Alaska.

9.12 Cotuit, MA @ Songwriter Series at The Cotuit Center for the Arts

I hope the Suffolk ‘n’ Cool download worked OK for you last week. I exceeded our upload limit on the Libsyn server but I think we got way with it. If you did have a problem, please let me know peter[at]suffolakncool.com

Megan Bonnell is an impressionist. Her melodies and piano compositions create a dream-like image of moments that once were. Her lyrics are the warm, pastel colors of the scene itself that tell the listener that they too, were there. She unifies folk and pop with her catchy, yet honest songs about nature, relationships, and love. Her lyrics are sometimes dark, sometimes playful, but her voice ever captivating with its ethereal beauty.

Recently signed to Nevado Records & Management (Bahamas, Yukon Blonde, Golden Dogs), her debut EP titled MAPS will be released around the world on June 21st, 2011. The four songs featured on the release are geographically-themed; The lyrics tell stories both real and imagined; The music transports the listener. Mixed by Chris Shaw (Bob Dylan, Wilco) and mastered by Phil Bova (Feist, Bahamas, Zeus).

There is some wonderful close to the ear singing but not in a schmaltzy way – just very direct and intimate, accompanied by moody keyboards and some lovely uncredited strings – probably cello and violins. I particularly impressed by the title track Maps.

This is the first single titled “South Korea” and it was released in May 2011 alongside this ethereal and surreal video directed by Toronto visual artist Joy Broadbent.

Kimo Watanabe has been a good friend through the show for a long, long time. It’s great to hear his sound and confidence grow. His band Rebel Zion has a new EP called Salvation out. You can get it from the bandcamp site.

West Coast based alternative rock band Evaline have achieved many milestones early on in their career that would impress even a seasoned band. Since they graduated school Evaline’s talents have been recognized by some of the biggest names in music like The Used, Deftones, Placebo, and My Chemical Romance.

Following their EP Patterned from earlier this year, the band released their debut album through Riverman Records on June 27th.

The band is currently impressing European festival crowds including Hard Rock Calling with Bon Jovi, Hyde Park London, T in The Park, Scotland, Werchter (Belgium), Arras Festival with Coldplay (France) and  were handpicked by My Chemical Romance to support at iTunes festival in London.

They will be returning to the USA in August for a run of club shows on the West Coast including, Seattle, Portland, San Fran, Sacramento, Reno, Denver and LA.

“Diaspora Hi-Fi was more a travel through my background and roots,” she says. “Now my obsession is ‘the wall’, both concrete and abstract.”

Radio Babel (the latest release) is predominantly concerned with destroying boundaries everywhere. The first video, a mini-documentary focused on Mexican-American border issues, is set to the breakthrough song “We Are One,” and features interviews with migrant workers and farmers.

If there’s any romance left in the old State highways. If there’s still a story in the  Trans Canada. If there’s a legend to be found in a cluttered old bookstore, a crowded coffee house, or a stranger’s conversation. If there’s any power left in a  folk song, Carmel Mikol is out to find it. And write about it.

Cape Breton native Carmel Mikol is set to release her second LPCreature independently (distributed in Canada by Sound of Pop/Fontana North) on August 9th, 2011. Much like her songwriting, her release method is not typical. Mikol has penned a companion book of stories, poetry and lyrics, giving fans a deeper look into her Creature project. She also has unleashed a series of pre-order packages at available now on her website. Fans receive an advance digital download of Creature and a digital version of the book as soon as their order is processed.

A triple nominee at the 2011 East Coast Music Awards, Mikol will support the new release the best way she knows how – by touring extensively. July will see her sweep through the East Coast of Canada and Maine. In the fall, Mikol brings her intriguing and entertaining on-stage spirit to Eastern and Central North America (dates to be announced soon).

Dates through the rest of July (in Moncton, New Brunswick tonight) on her site.

After three years spent in apartments, basements, villas and cabins in Pallers, La mar, Stockholm, Miami and Cape Town the duo has completed their debut album ”The Sea of Memories” (out Sept. 27). Ten tracks where every influence finds it’s place in an ever shimmering mosaic. The wealth of details, the ever growing melodies and epic soundscapes transforms the listening experience into a space voyage of emotional discoveries. The album is scheduled for release in September.

They come from the same small town in the south of Sweden – Åhus – and have known each other half their lives; they’ve explored Stockholm’s night life together, travelled Europe and experienced everything from the glamour of Southern Spain to the dirty floors of German clubs… etc. But they’ve never made music together. Not until now.

Half of the duo nurtures a love for love for ambient, trip hop and electronica while the other is deeply involved in the world of pop. Pallers integrate the seemingly tricky components with such ease it almost seems effortless – turning it into something new – something of their very own.

The single ”Come Rain, Come Sunshine” is released on July 26.

Note. Pallers is a neighborhood in the outskirts of Åhus.