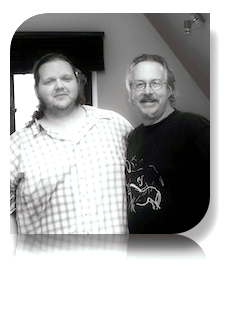 Based in Cape Breton, Canada, Matt Andersen (here at the barn with Peter) has a larger than life showmanship that has been earning him a fervent and steadfast audience wherever he graces the stage. Matt’s sprawling blues, roots and rock musical hybrid with his sorrowing and soulful voice and astonishing guitar-playing has sparked a phenomenal buzz on Canada’s East Coast.

He called by at The Barn on Sunday morning and played a remarkable session. I swear that the skill in his guitar playing and passionate power of his superb voice is still reverberating around the building. My thanks to Matt for visiting and to Jeremy Gugenheim for the recording set-up. Such is the power of Matt’s voice that even when he threw his head back away from the vocal mic to sing particularly loud passages into the roof, he was peaking the guitar mic! Hmm. Get out of that one JG!

Thanks are due to Daryl and Buzz, listeners in Manitoba for putting me onto Matt in the first place – truly appreciated guys.

Matt Andersen is a very real, rare, raw talent and career artist — vital to our musical landscape. For more info on Matt and his music catalogue go to:

Here’s a video of one of the songs that Matt played in the session. Yes, he was sitting in the tidy corner!

Also this week, I met up with Paul Spencer who puts on the Maverick Festival (1-3 July) just over the hill here in Suffolk. He’s a man driven by his enthusiasm for music and for putting on a really enjoyable festival. We need a a few more his ilk.

I’m hoping to be there so, if you can, get down and catch the festival.

Sessions at the Barn

Produced and presented by Peter Clitheroe