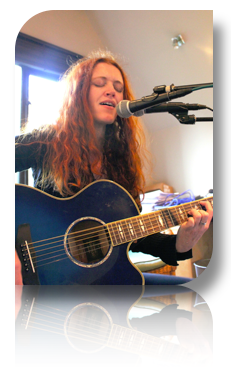 One of our occasional series of Sessions at the Barn. This time it’s a live session with New Zealand musician Jordan Reyne, recorded last Friday at the Suffolk ‘n’ Cool barn near the east coast of England.

Children of a Factory Nation, the new and, as yet, unreleased album from Jordan Reyne, is a tour de force, not just to be impressed by, but also a body of work in which to get totally and gloriously lost. Every track is pure Jordan Reyne and yet there is masses of variety from “traditional” ballads to the essence of pure rock.

Her signature use of industrial and found sounds could be dismissed as just a gimmick – until you hear the intelligent and measured ways in which she uses them to enhance her songs. Her fabulously expressive voice and playing is fortunately complemented by the hallmark of a real musician – finely-tuned ears.

The overall effect is of a singer/songwriter of serious intent and driven passion for her craft and for the people she sings about. The recording / mastering gives the impression that her voice is just inches from your ear – deliciously disturbing.

Jordan Reyne is carving a her own niche in the sometimes monotonous world of contemporary music. This is truly independent music that will surely (if there is any justice in this world) reach its audience. With your help in spreading the word, I truly believe it can happen.

Her latest single Johnny and the Sea is available now. The albumChildren of a Factory Nation is slated for a full release in September although there is lots happening before then including EP releases and an appearance at the Glastonbury Festival. Check out Jordan’s site for the latest news and specially commissioned videos at:

Sessions at the Barn

Produced and presented by Peter Clitheroe