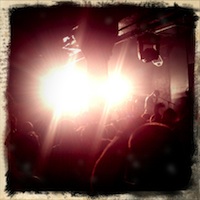 SnC takes a turn for the quirky side of quality this week with some remarkable and varied music from LA, Holland, Canada, Finland, France, Australia, London via New Zealand and Catalonia.

The Great Escape in Brighton turned out to be a great gathering of a bunch of lovely folks from podcasting (Codger and Grumbler), industry movers and shakers from USA, UK and Australia and artists from all around the world including some that I’d missed at CMJ, others who have been on the show and one, Jordan Reyne who’s been on the show via Skype and with whom Codge, Grum and I were able to hang for most of the festival. In all, a totally absorbing and delicious blast.

What’s more, Jordan’s masterly new single is released this week and we’ll close the show with it.

The picture this week was taken at the Aussie BBQ at Great Escape in an attempt to capture some of the energy of the live show.

Roger started his musical studies at the age of 5 and progressed to clarinet and sax at 12. He got a break on Radio in Cataluña a couple of years ago.

Not a lot more I can tell you yet except that Codger picked up a bunch of promo CDs at TGE and this was on one of them.

COYOL is a collision of the old Southwest and the new Los Angeles. A seemingly contradictory duo, it is a beautiful juxtaposition between polished and poignant vocalist, Céleigh Chapman, and unrefined, avant-garde artist, John Isaac Watters.

Céleigh wrote the first stanzas of “Gone Gone” after speaking with her grandparents about failing crops and the continual fight for water in California. Together, Watters and Chapman applied this sense of helplessness and defiance to loss of faith, failing relationships, and dislocation in an attempt to write a song that felt like singing a Steinbeck Novel.

Chapman grew up singing country standards in the juke joints of Bakersfield, California. Her first performance was “Home On The Range” in the third grade; years later, after watching her at the Crystal Palace, Buck Owens gave his approval. Watters was born in Mexico City, raised in Tucson, and spent some of his childhood in Coyol, Veracruz. He is an artist, architect, and musician whose rare lyrical talents and fearless approach to songwriting feel both fresh and familiar.

The seed for COYOL was planted when Chapman, Watters, and keyboardist Will Gramling met in college and gathered with a group of like-minded musicians in the evenings to play old hymns and folk songs. This collective of musicians eventually disbanded into multiple projects and Watters and Chapman started writing songs together. They asked Texas native and long time friend Gramling to produce their self-titled debut EP and join them on keys…thus, COYOL was born.

Catch them live at Silverlake Lounge, Los Angeles, CA on May 26th

Remix sets will be played live in Turkey this summer. Just wanted you to know about it so that you could reconsider your holiday plans!

No firm dates but Jan at Black&Tan records in Holland is going to keep us informed. He says we also have to imagine live guitar over the remixes. Now this is getting really interesting.

You want to hear the whole set?

I’d also recommend that you check out the other tracks on the miX&dorp Soundcloud especially Ice Storm, based on a track by Boo Boo Davis.

I had the good fortune to catch Carmen’s set on Friday at The Great Escape in sunny Brighton.

She was playing as part of the Nova Scotia music showcase event at the Queen’s Hotel. High energy really doesn’t do Carmen justice. She was so energised that she seemed to be forgetting to breathe when speaking between songs.

Great show and whipped up quite an atmosphere, despite playing in a hotel lounge mid-afternoon with sun streaming in!

Digital Music News reports that festivals are becoming huge moneymakers, and that’s great news for host cities (among others). But how much is all of this worth? Just this week, UK Music measured the impact of festivals and major music concerts, the first study of its kind.

So what did they find?  Try a contribution of 1.4 billion pounds ($2.3 billion) last year from a music-loving mob of 7.7 million travellers.  “The message is crystal clear,” said Feargal Sharkey, chief executive of UK Music.  “Music provides a huge boost to UK tourism, it drives growth, it sustains thousands of jobs across all regions and it enhances our lives.” That is, 19,700 full-time jobs according to the study.

Most of the tourism is coming from within the country, with just 5 percent coming from abroad.  But foreigners come with a premium: UK Music found this group responsible for 18 percent of the total spend.  “The rest of the world clearly recognises the importance of music to the UK,” Sharkey continued.  “It is time we did similar.”

“Creativity is our nation’s calling card.”

Instrumental post-rock from Finland might be expected to be a bit dark and brooding but take a listen to this from the band’s debut album The Days You Didn’t Notice (2010).

Rendezvous Park is a two-piece post-rock act from Finland. The studio entity of Rendezvous Park consists of Kai Kousa (acoustic and electric guitars, bass) and Mikael Nousiainen (piano, glockenspiel, drums programming, additional percussions). For live shows other musicians are drafted in to recreate the multi layered and rich sound of the album versions.

The next full-length album is currently being written.

From the album Les Illuminés on Jamendo. You can download it direct from www.jamendo.com/en/album/8814

Sadly his website isn’t available because his domain name has expired. Hook up with him on Jamendo though.

This week Sean Robertson is making his AMPed debut Live from his garage. On Monday someone will hopefully be presenting AMPed 284 but I have no idea who it will be. Could even be me again! “Oh NOs”

As I mentioned a while back, one of the frustrations of CMJ was the artists that I didn’t get to see, with around 50 shows on at any one time, it just isn’t possible to see every you want to. The Jezabels were one such band. Fortunately I was at The Aussie BBQ at The Great Escape festival in Brighton this weekend and got to see them at last. It was well worth the wait.

The venue was at capacity with over 100 people queuing outside hoping to get in. Congratulations are due to Millie from Sounds Australia who treks around the world promoting Australian artists for Sounds Australia and to Cathy Ogden who represents the Australian rights group APRA/AMCOS in London and who did a great job as MC for the showcase event.

Formed at university in Sydney in 2007, The Jezabels’ careers seem to have really taken off in the past 12 months.

Since releasing their second EP, She’s So Hard, in November 2009, the four-piece have toured supporting Tegan & Sara, Katie Noonan and Josh Pyke, and as headliners in their own right (selling out shows nationally in the process). They’ve watched Hurt Me, the lead single from She’s So Hard, receive heavy rotation on radio in Australia and abroad, a feat also achieved by its follow-up, Easy To Love. Fittingly, The Jezabels have seen their fanbase grow every step of the way.

Johnny and the sea – Jordan Reyne (London, via New Zealand)

Jordan’s new single – Johnny & the Sea – goes on sale tomorrow May 19th. It is the first single from the upcoming album “Children of a Factory Nation“, set in the crowded streets of London in the time of the industrial revolution. Johnny & the Sea tells the story of a young man who choses a life of adventure over conformity, but who pays the ultimate price.

Check out this darkly wonderful animation by Eloise Coveny and Johnathan Lamb.

Do check out Jordan’s other videos on YouTube atwww.youtube.com/user/jordanreyne

There is a purchase link for the single atwww.reverbnation.com/store/artist_637473

If you fancy joining a bunch of disparate podcasters in central London pubs on Saturday, you’ll be very welcome. Rowley’s carefully planned and researched route is at: