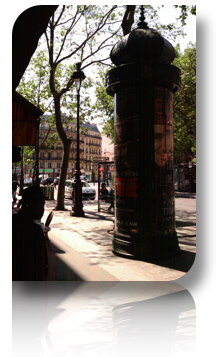 Just back from a lovely weekend in Paris (right) and raring to go with some great music again, and this week it is a full length show. Sorry about last week. I simply ran out of time.

Our dear friend of the show Kimo Watanabe reminded me that today is the 30th anniversary of the death of Bob Marley. How can it possibly be 30 years?

Later this week I’m off down to Brighton for some the Great Escape Festival, to meet up with Pete (Codger) Cogle and The Grumbler for some animated conversation, with a very special artist to record a feature for the show and with a few of the folks that I met at CMJ in New York last October. If you’re around on Friday or Saturday DM suffolkandcool on Twitter or email me peter@suffolkandcool.com Perhaps we’ll be able to meet up.

As a young girl growing up in the countryside of Brazil, Van Muller became enthralled with the music her three aunts introduced her to: Rock N Roll. Muller had the posters on her wall of rock icons and endured long bus trips to catch her heroes live, always dreaming that one day it would be her up on the stage. Inspired early on by the showmanship of acts such as Queen, David Bowie and Madonna, Muller quickly fell in love with the singer/songwriter aesthetic espoused by James Taylor, Neil Young, Bob Dylan and even the Beatles. Muller developed a hunger for American culture that was insatiable, be it for movies, television or the latest hot rock/pop act on the scene.

At the age of sixteen, Van Muller gave up her comfortable country life and moved to Sao Paulo, Brazil to try her hand at modelling and start a band. Her first stage experience as a vocalist was performing cover versions of 1980’s rock hits. Muller took the process seriously, engaging a professional voice teacher and traveling to New York City every chance she got. Eventually Muller made the leap of faith and moved herself to New York, hoping the bright lights of The Big Apple would light the way to her dreams.

Van Muller is currently having a blast developing her debut album,Find Yourself Here under the guiding hand of producer/bassist Ken Rich (Joseph Arthur, Ani DiFranco, David Byrne, Shabba Ranks). Muller credits Rich with helping her become more focused as a songwriter. There’s a freshness to the album, as Muller tells stories from her own life, crafting a blend of musical styles ranging from 1960’s to 1990’s rock and pop. It’s as if Muller took all the influences of her childhood heroes, internalized them and has created something new yet with distinctive ties to the past. You’ll be hooked from the opening notes with Muller’s confessional style, pop sensibility and her amazing voice.

Ladies and gentlemen, mesdames et messieurs, Damen und Herren, from what was once an inarticulate mass of lifeless tissues … please help us welcome into the world Fellaheen’s latest creation, cheerily entitled … DEATH & FROLIC.

It clocks in at a hale and hearty 54 minutes and 25 seconds, and is comprised of 12 compositions (plus the obligatory “hidden” track) which scale the heights and plumb the depths of mortality, insanity, love, hate, loss, karma, birds of peace, and dogs of noble bearing (if questionable lineage).

You can call Carmen Townsend’s music many things, but reserved isn’t one of them. As polite as she may be in person, within Townsend lives a voice much louder than she lets on in conversation. It’s one that manifests itself onstage through her raucous live sets, full of an intensity that has been building throughout Townsend’s career as a musician.

As an artist, Townsend knows how to keep listeners on their toes. “There’s a whole lot of energy with us onstage,” says Townsend in her charming and pleasant drawl. “I’d rather be onstage playing live than anything. I feed off of that raw energy. I often get compared to other female singer songwriters, but if these people came to see me play, they’d think otherwise. It’s a three-piece rock band, with a ton of low end and a lot of hair flying everywhere.”

In short, there’s a lot that the world of music has to learn about Carmen Townsend. Born and raised in Cape Breton Island on the Atlantic Coast of Canada, Townsend has been making music her whole life. Now it’s time for Townsend to take center stage and share her voice with the world. Opening with the rollicking groove of “River Rat,” Waitin’ and Seein’ immediately strikes a chord on two levels: Townsend’s sound is a vast one, with stretching riffs that give birth to a fierce sonic motion. What’s more, Waitin’ and Seein’ is augmented by Townsend’s voice, an earthy howl that is at once immediate yet enduring.

Carmen’s track Without My Love was featured on SnC 267

They were Adnams Artists of the Month in January.

The band has performed over sixty shows covering the Southwest in 2010, including several tours through Southern California, San Francisco, Las Vegas, Phoenix, and Austin (SXSW). On the journey to SXSW, they made a tour video set to an acoustic version of their track Silent Revolution. Watch it at: http://fb.me/HnGccTqp

Staci’s Edge offers an opportunity to hear some of the best rock music in town. They were nominated by the Houston Press “Best of Houston 2010” awards as one of the top bands in the city. Butler’s searing guitar riffs, inspired by the likes of Jimi Hendrix and Eric Clapton, beautifully compliment her fresh, indy-rock melodies in ways that are nothing short of innovative. Rounding out their distinctive sound, Staci’s Edge boasts some of the most consummate musicians on the current indy circuit. Guitarist Chris Shaw proves the old saying that you can never have too much of a good thing by weaving his own 6-string stylings seamlessly around Butler’s, bassist Corey Moss adds the driving thump that keeps audiences on their feet, and drummer Kirk Gentle is anything but, as he seals each song with precise rhythmic style.

It’s been a long road for lead singer, songwriter and guitarist, Staci Butler, whose life experiences have influenced both the sound and identity of Staci’s Edge in numerous ways. In 2003, Butler put the guitar down and bowed out of Houston’s music scene to start a family. Two years later, her world was rocked by a cancerous diagnosis. Butler found her fighting spirit and battled through ten months of chemo and radiation therapies. She came through it with a clean bill of health, a new lease on life and a determined inspiration for her music.

“I was so grateful for a new chance at living,” says Butler. “I decided that if I was going to make my dreams a reality I needed to do it now.”

She sat at her piano and was inspired to write “For the First Time.” A song about her new view on life,— if you work hard and believe in yourself, you can achieve anything.

“I was going to start living my dream for the first time”, says Butler.

She’’s done just that! Butler has been cancer free for 5 years and her new mantra has paid off for her and her band. Staci’s Edge was formed in 2008 and their fan base has been growing steadily ever since. With the release of their new CD “I’ve Got It All,” more success is on the horizon for Staci’s Edge.

So Hard To Sail – The Sterns (Kyiv, Ukraine)

The Sterns is a blues-rock duo from Kyiv, Ukraine. The band was known as The Sexy Sterns, but with the change of the drummer the name was changed.

This is a promotional copy before the release of the first official The Sterns’ (UA) album. This piece contains three songs, full album consists of 11, all of which are written by Max Tovstyi. Recorded and mixed at the BrokenBricks Studio in Kyiv, Ukraine.

You can get it free and legal from:www.jamendo.com/en/album/90059

The complete album will be uploaded soon, probably at the end of May, 2011.

This week’s number one track on Jamendo. Released last October it haas clocked up over 175,000 listens and almost 9,000 downloads.

Rich Palmer of Audio Gumshoe is presenting show 282 right now and then, from Monday you’ll be able to catch the debut on AMPed of Sean Robertson whose show Live from My Garage is the newest member of the Association of Music Podcasting.

Through their highly melodic Americanized Brit Rock flair – reminiscent of bands like Muse, Keane, and Brand New – Sounds Under Radio has forged an audience and a sound uniquely their own and with their sophomore release, Where My Communist Heart Meets My Capitalist Mind, they continue to build upon their musical truths that they established with their first albumCinematica (2008).

Where My Communist Heart Meets My Capitalist Mind is an album that investigates a marriage of opposites and the collision of conflicting forces. In other words, the everlasting battle of HEAD versus HEART.

Putting this special acoustic track out for digital download as a tribute to the late great, Robert Nesta Marley who passed away 30 years today.

Pick it up for yourself at:http://rebelzionmusic.bandcamp.com/track/no-woman-no-cry