iTunes 11 was released yesterday and I rather suspect that it may be more significant for what’s not yet visible than for the new look it has taken on in the latest version. 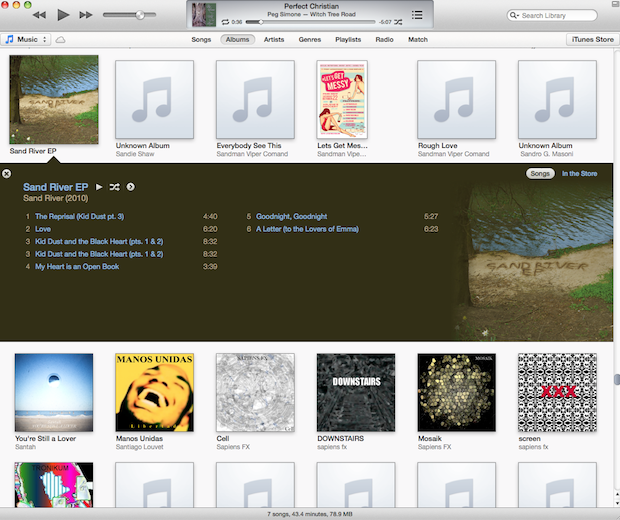 The visible changes with 11 initially had me panicking about familiar workflows in checking out music and in keeping track of music and preparing for the show.

Here’s a SnC production secret, I create a playlist for each show then simply drag the tracks in as I audition them. Sorting them into a suitable running order is a doddle and finding the original files to inject into the production software is dead easy.

However, after about 5 minutes playing about with the new look user interface, I was reassured that nothing much has changed in terms of functionality although it looks very lovely.

Perhaps the biggest user-friendly innovation is the new version of the mini player which now enables almost all the actions you’re likely to take to happen right there in the player.

The main browser window look superb on a big display with way more albums (and their artwork) visible in a single view than before. However, I must admit that the predominant grey screen makes it very obvious that most of the music in my 15,000 track iTunes collection simply doesn’t have artwork. It’s a bit like the white label test pressings that used to come back from the pressing plant years ago.

I do wish that more of our much loved independent artists and labels would include artwork and useful tags in their mp3 files. The look of the music is all part of the music fan’s experience and the new iTunes will draw even more attention to missing artwork as well as beautiful artwork.

What doesn’t particularly show at first sight is the significantly increased integration with the iTunes store, the blurring distinctions between downloaded and streamed purchases (watch out Spotify) and the liklihood (in my view of much greater radio integration (worried yet Pandora?).

OK, these trends may not be rolled out immediately but I think the writing is o the wall and, say what you like about iTunes when Apple put their mind and money into it, they most often get the whole user experience pretty close to right. Time will tell.

Meanwhile, if you’ve had a look a the new iTunes, let us know what you think.